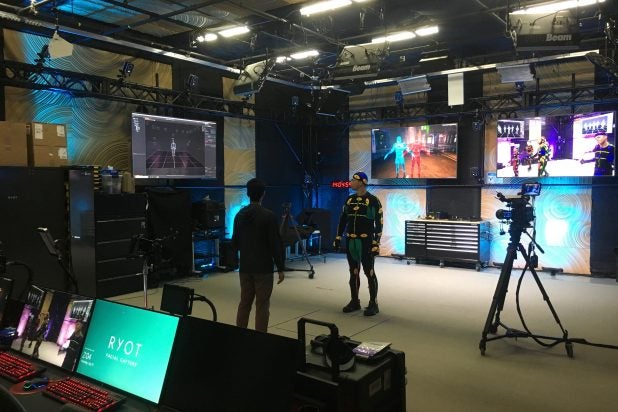 “It’s really going to democratize and allow people to do crazy cool animations without having the institutional knowledge,” Nigel Tierney, head of content at Verizon Media’s RYOT studios, says

Rapper Lil Dicky’s hit music video “Earth” is a call to save the planet — and an example of how new 5G technology stands to revolutionize animation.

Verizon Media’s RYOT Studio, which partnered with the Leonardo Dicaprio Foundation and 3DAR to create the animated music video,  had the daunting task of animating 60 characters in a variety of settings, including the jungle, space and ocean. By traditional standards, the video should have taken a year to finish, but the motion-capture stage located in RYOT’s studio is powered by a 5G node — a small cell tower that allows for ultra-fast wireless data transfers — that allowed the project to be finished in six months.

“We needed for it to come out for Earth Day, which coming from a traditional animation background, it just wouldn’t be possible,” Nigel Tierney, head of content at Verizon Media’s RYOT studios, told TheWrap. “It’s time-consuming and intense in cost and labor.”

Creating an animated film that marries technology and art is a tedious venture that takes years to make, with a good portion of that time dedicated to rendering. But by relying on 5G technology, Verizon Media’s RYOT is upending the animation process.

“One of the frustrations I found was typically the production process was so arduous. About three-to-five seconds of animation throughput a week and about three-to-five years to make one feature film,” recalled Tierney, who spent nearly a decade at Dreamworks Animation. “And I’ve been on feature films where I’ve spent four years of my life on and the film never came out.”

But now the process is becoming much less time consuming, at least in Verizon Media RYOT studio, where 5G has enabled quick data transfer and high-speed rendering.

In “Earth,” for example, RYOT had Lil Dicky act out the movements and facial expressions of each of the 60 characters with the data being rendered in real-time, which is a significant leap forward, says Federico Heller, co-director of “Earth” and co-founder of 3DAR, a virtual reality, film and animation studio

“Obviously, there was a lot of polishing that happened after that, but it’s something that manually is impossible to do in one day,” he told TheWrap. “But we were able to capture it right there with the singer himself.”

Usually, rendering a single frame can take anywhere from minutes to hours. For example, in “The Lord of The Rings,” it took up to eight minutes to render one frame of Gollum, the little creature obsessed with the ring.

The more detailed the setting or character, the longer it can take to render. A single frame in “Monsters University,” which came out in 2013, could take up to 29 hours to render despite using thousands of computers, according to supervising technical director Sanjay Bakshi, who has described the process in past interviews.

“The idea of what digital did for film is what’s happening now with what 5G is going to do for animations,” he said. “It’s really going to democratize and allow people to do crazy cool animations without having the institutional knowledge.”

For now, Verizon’s 5G tech is being used primarily in-house through Verizon Media’s RYOT 5G Studio to create content for Verizon Media’s ecosystem of brands including Yahoo and HuffPost. In April, Yahoo News launched an XR Partner Program, which gives partners like USA Today, Reuters, The Associated Press, Time, and NowThis unprecedented access to 5G technology. (XR stands for extended reality can be used as a blanket term for AR, VR, and mixed reality).

“5G is going to change how we consume content, and how we create content dramatically,” Alex Wallace, GM of news, entertainment and studios at Verizon Media told TheWrap. “Right now, we’re taking baby steps. We’re testing: What does real-time animation look like? And we’re just beginning to see the capabilities of what 5G is going to do.”

The expectation is that eventually, VR headsets will no longer need to be physically attached to computers, opening the door to sleeker designs and, in turn, greater consumer adoption. For RYOT, which specializes in creating VR and AR content, this is one more thing to look forward to when it comes to 5G.

Beyond creating content in a studio, Tierney says 5G will open up the door to better interactive content and faster processing on devices like phones and laptops. This is because the computing will take place on the edge of the 5G network rather than from inside the phone or computer.

“What you would have attached to the 5G cell tower when it has reached its full capacity is CPUs (computer processors) and GPUs (graphics processing unit),” Tierney said. “So now, all the things that you’re worried if your phone can do, you don’t have to worry anymore because the computing takes place in the network.”