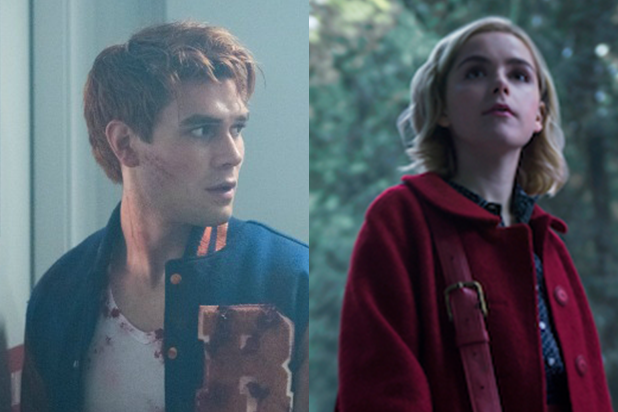 Fans of the Archie universe will know that the upcoming Netflix series “Chilling Adventures of Sabrina” was initially in development on The CW, the network home to showrunner Roberto Aguirre-Sacasa’s other show “Riverdale.”

But it turns out that before plans were made to give the teenage witch her own show, the “Riverdale” writers tossed around the idea of bringing the character in as the Season 1 finale reveal, thus switching up the genre to better match the comics. Aguirre-Sacasa writes the “Chilling Adventures of Sabrina” and “Afterlife With Archie” comic books.

“During Season 1 of ‘Riverdale’ — before ‘Riverdale’ exploded and found its footing as sort of a noir, crime, pulp show — we had said, ‘Maybe season 2 will be like [the comic] ‘Afterlife With Archie.’ We’ll do a big genre switch and it will be horror, and it will be ‘Afterlife’ and Sabrina could come and be the antagonist,” Aguirre-Sacasa said in an Entertainment Weekly interview on Thursday. “There was even a time when we talked about the Season 1 cliffhanger being the arrival of Sabrina.”

So why go with a separate series altogether?

“For various reasons, and I think partly because ‘Riverdale’ found its footing as more crime show, that felt less and less like the right fit,”Aguirre-Sacasa said. “It felt like if ‘Riverdale’ is crime and pulp and all that stuff, then ‘Sabrina’ could be horror. It felt like there was a separation between Greendale and Riverdale — magic should exist in Greendale, but not in Riverdale. That was the thought.”

There was even a time when Sabrina almost made it to the big screen — but Aguirre-Sacasa is now grateful that plan didn’t pan out.

“For a long time I was trying to get ‘Sabrina’ done as a low-budget horror movie for Jason Blum [of Blumhouse Productions], and even wrote a screenplay with a friend that strangely, though it’s very different from the show, it did center on her 16th birthday,” Aguirre-Sacasa told EW. “Ultimately, Jason didn’t want to pursue that, and thank goodness because we’re getting to do this as a TV show, which feels right.”

“Chilling Adventures of Sabrina” debuts on Netflix on Oct. 26.