A burning morning-after Oscar question: When Tom Hanks came onstage at the end of the night to present the Best Picture award, why did he immediately open the envelope and announce the winner without even reading the nominees? 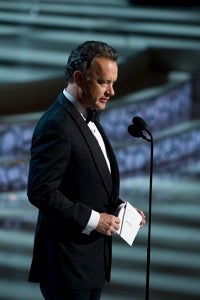 Was his copy trimmed because the show had already passed the three-and-a-half hour mark, or did producers Bill Mechanic and Adam Shankman figure that after a night of film clips from all the nominated film, viewers didn’t need to be reminded of the nominees?

The answer, it turns out, is the latter.

This morning, Hanks answered the question on his Twitter account: “Nope, I didn’t hurry the Best Pic bit: That’s how it was planned and rehearsed from the get go.”

And Oscar show writer Bruce Vilanch confirmed to theWrap that “it had been decided beforehand” to cut to the chase rather than reading the nominees.

Hanks’ announcement that "The Hurt Locker" was the winner came so quickly that it seemed to take director Kathryn Bigelow, who was waiting in the wings after winning the Best Director award, by surprise.