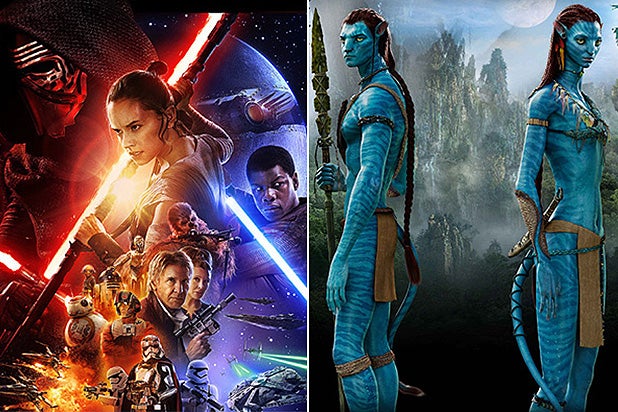 Spoiler alert: It’s going to do it, it’s only a question of when. J.J. Abrams’ hit was at $1.56 billion on Wednesday, with $760 million from North America and roughly $800 million from overseas. That means it’s more than halfway (55 percent) to the $2.8 billion worldwide total that “Avatar” delivered for Fox in 2009 after roughly three weeks.

By the time it goes into its fourth weekend on Friday, the combined domestic and foreign grosses of “The Force Awakens” will leave it behind only the lifetime global hauls accumulated by “Jurassic World” ($1.8 billion), “Titanic” ($2.2 billion) and “Avatar.”

“The Force Awakens” has accumulated its big numbers at much faster clip than “Avatar.” It hit $1 billion in worldwide grosses in 12 days, for example, while Cameron’s tale of the Navi needed 19 days. “The Force Awakens” took just 20 days to surpass the $760 million in domestic grosses that Fox’s “Avatar” needed more than two months to roll up.

“The elusive $1 billion mark in North America is now within reach and a reservation for a spot in the $2 billion global club should be penciled in at this point, too” Paul Dergarabedian, Rentrak’s senior media analyst, told TheWrap.

The movie’s performance so far and the positive word of mouth it has generated make the strongest arguments for “The Force Awakens” breaking the global record, but there are two other factors that give it a huge edge: the massive growth of the overseas market and IMAX.

Also Read: Can 'Star Wars' Soar in China Without The Force of Familiarity?

Plus, “The Force Awakens” has shattered records without playing in the No. 2 movie market in the world, China, where it rolls out on Saturday. Shanghai Disneyland Park is set to open later this year, and Disney’s brass is banking on “Star Wars” to give the park’s launch a major boost.

Last weekend, Rentrak reported that international box office hit an unprecedented $38 billion, up 23 percent from 2009, when “Avatar” was released. China was the biggest factor in this year’s expansion, with a box office that hit $6.8 billion in 2015, up an incredible 48 percent from last year.

During its box office blitz, “Star Wars” has also received a huge boost from IMAX theaters, raking in more than $155 million globally from roughly 668 theaters worldwide, 276 of them overseas. That number will surge to 940 on Saturday when 272 IMAX screens in China are added for the film’s debut there.

“China has been a priority for us for years thanks to the vision of our CEO Richard Gelfond,” IMAX Entertainment President Greg Foster told TheWrap. “Our successful initial public offering for IMAX China last year is evidence of that, and having a really successful run with ‘The Force Awakens’ there will underscore that.”

One thing that “Avatar” had that “The Force Awakens” will not is a favorable exchange rate. With the dollar currently very strong against most overseas currencies, studios are seeing their returns cut by between 10 and 20 percent when foreign grosses are exchanged for U.S. dollars, depending on the country.

China underwent a stock market meltdown last year, but the yuan has been relatively stable, so the financial hit may not be as severe as that.