The international reaction to 47-year-old Susan Boyle’s performance singing "I Dreamed a Dream" from "Les Miserables" in the auditions for "Britains Got Talent" last week has surpassed anything that could be managed and executed by a battalion of PR experts. 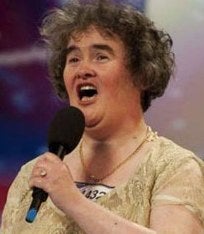 Her modest story as much as her singing has captured the imagination of an unlikely assortment of people in a way that is possibly unprecedented.

The self-belief this wee woman had before she took to the stage was infectious and defiant even as the audience was sharpening its knives. As she faced the judges and the giggling audience there was a moment when it seemed she would fall prey to the crowd.

As with anything involving Simon Cowell, contrived cruelty is inevitable and this show thrives on freakery as much as ability — look for Gwyneth Marichi on YouTube if you need convincing.

The very first syllable from Boyle swayed the audience and judges in a manner unmatched in any of these talent format programs and Boyle’s glorious innocence as she trooped off, oblivious to the judging process, was priceless as was her reaction to their approval

When one considers that Britney Spears is charging her fans a small fortune to mime to them, it is infuriating that so many talented people languish in obscurity. Of course this was only one song and one performance but she seems to have touched a generosity in people that has been dormant for too long.

Although the clarity and purity of her voice is not in doubt, it was her unadorned and succinct delivery of the lyrics, I think, which spoke to audiences everywhere.

At a time when we are spontaneously questioning our motivation for amassing a host of material goods and suffering the consequences of the accompanying bills, Susan’s story touched a cord with many people, the majority more sophisticated and worldly than her. People who have seen a cavalcade of executives line their pockets as banks and corporations collapsed; people who are struggling to maintain their self-belief and dignity as their employers, for whom they have sacrificed a lot, discard them … briefly felt unburdened.

As is often the case, someone very unlikely becomes a figure of the moment. Susan Boyle is such a person, her talent, humility and sincerity are beyond dispute but she is above all else, an antidote to disillusioning times.