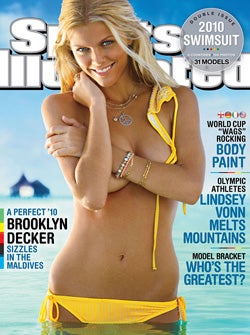 For SI, the Swimsuit issue is a big deal, and not just because of the exhausting marketing of the franchise that surrounds it. (The magazine figures to get an even bigger bump this year from Twitter, considering the large amount of followers Roddick and Decker both have.)

Make no mistake: the swimsuit issue is big business. Here are some hard numbers.

The issue generates 7 percent of the annual ad revenue SI generates. This year, SI sold 67 ad pages into its swimsuit issue, which was flat over last year. (In 2009, though, pages were down 33 percent — so maybe that’s a sign the ad market is stabilizing.)

The magazine points out that more than a dozen advertisers created custom packages for the issue — making it something like the print equivalent of the Super Bowl broadcast for print creatives on Madison Avenue.

And at the newsstand, the magazine usually sells well over a million single copies, or about 10-15 times how many regular issues of SI are sold.

But print is now just one component of SI’s multiplatform bikini onslaught.

Last year, when the cover was revealed, the website drew 22 million page views, or about 3 times the number SI.com normally gets. Accompanying videos served on SI.com were viewed 5.7 million times during the first two days the issue went live, up from 3.3 million over six weeks in 2008.  Then there are the video diaries, dedicated YouTube channels and Twitter feeds, and a New York party designed primarily for advertising clients to mix with sports celebrities and swimsuit models. And to buy into next year’s issue.

And, like everything else, there’s an iPhone app for that. (The $2.99 app has been downloaded more than 30,000 times since last summer, and was tops in the lifestyle category at Apple’s iTunes store a day after it launched, no doubt thanks, in part, to Ms. Decker.)

And to get a sense of just how influential the swimsuit issue has become, you don’t have to look too far. ESPN The Magazine launched its first annual “Body Issue” in 2009 – which drew the requisite criticism needed for buzz building. Maxim has one. Even Deadspin, Gawker’s sports blog, is planning its own.

SI won’t disclose actual revenue figures, but, as a franchise, the swimsuit issue was up roughly 15 percent year-over-year in 2010.

Considering the magazine’s overall ad revenue fell 12.8 percent in 2009 — 16 percent in pages — they’ll take all the bikini-buoyed revenue they can get.