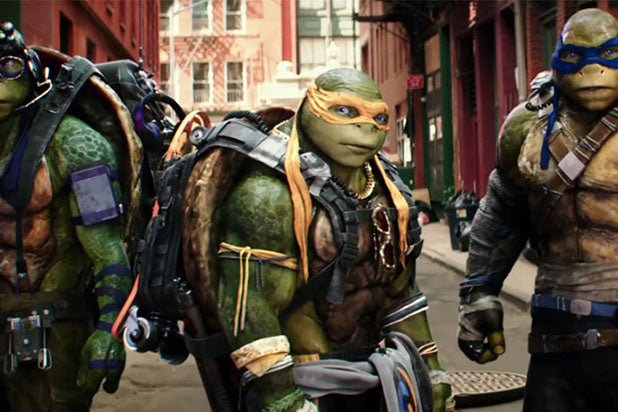 “Teenage Mutant Ninja Turtles: Out of the Shadows” is poised to be another one of this summer’s sequel slumps, tracking to open this weekend with $30 million less than its predecessor made in 2014. But analysts say it’s still a great investment for Paramount.

The studio’s 2014 reboot earned a $191 million domestic gross on a budget of $125 million, despite a 22 percent “rotten” score on Rotten Tomatoes. And this Friday’s sequel is looking to make around mid-$30 million for its opening weekend, with reviews even worse.

But projected box office is only one factor for the studio to continue the franchise — and insure that it remains lucrative.

Also Read: 'TMNT: Out of the Shadows' Review: Turtles Ape Other Superheroes in Empty Shell Game

“It’s worth it just because of corporate partnerships and merchandising sales, so I just can’t see Paramount giving this up,” senior analyst at Exhibitor Relations Jeff Bock told TheWrap. “Box office is obviously essential, but merchandise is too for ‘Teenage Mutant Ninja Turtles’ and films like ‘Transformers.'”

“No matter what you think of ‘Teenage Mutant Ninja Turtles,’ you have to agree that the brand is viable and justifies the investment,” senior analyst at comScore Paul Dergarabedian told TheWrap. “It is a brand that is very well known, and these movies seem fun and lighthearted in a way.”

Indeed, “Teenage Mutant Ninja Turtles” has been around since its debut as a Mirage Studios comic book in 1984, before expanding to video games, toys and several cartoon series. Vehicles, playsets and accessories quickly became the top collectibles for children.

Sales for “TMNT” topped $1.1 billion from 1988 to 1991, according to the L.A. Times. At one point, the Turtles represented 60 percent of all movable toy characters sold in the U.S.

“TMNT” is still expanding on video gaming platforms. In January, Activision and Platinum Games announced “Teenage Mutant Ninja Turtles: Mutants in Manhattan,” a video game that would be available for PlayStation 4, PlayStation 3, Xbox One, Xbox 360 and PC.

“It makes sense to keep making the movies because of on-demand and home video — it’s a cash cow for the long term,” added Dergarabedian. “It’s not a billion-dollar-per-movie situation, few franchises can boast that, but it’s solid enough to justify continuing to keep making movies and to keep the revenue stream flowing.”

Back in 1990, New Line earned a whopping $133.2 million domestically on the first “Teenage Mutant Ninja Turtles” movie. The 1991 sequel made $78.6 million. The next films in the franchise didn’t really rake in the big bucks.

“You have to look at the overall picture,” said Dergarabedian.