Megyn Kelly’s interview of conspiracy theorist Alex Jones, scheduled to air this weekend on NBC’s “Sunday Night with Megyn Kelly”, is not sitting well with families of the children and adults killed in the 2012 Sandy Hook Elementary School shooting.

The Connecticut law firm Koskoff, Koskoff and Bieder, which represents the families, sent a letter on Thursday to NBC News chairman Andy Lack urging the network to scuttle the broadcast of the interview.

“NBC is not responsible for the harassment and abuse Alex Jones has cruelly visited on our clients. But,” the letter reads, “by choosing to air his interview with Ms. Kelly – at all, let alone at prime time on Father’s Day – NBC has tendered its good name and considerable influence to provide Mr. Jones with something he has never enjoyed: legitimacy…”

The letter continues: “Airing Ms. Kelly’s interview implicitly endorses the notion that Mr. Jones’ lies are actually ‘claims’ that are worthy of serious debate; and in doing so it exponentially enhances the suffering and distress of our clients. For that NBC is responsible.”

Jones, through his website InfoWars, has promoted several discredited conspiracy theories about the massacre. Notably in September 2014, when he claimed that “no one died,” and that the victims were “child actors.” Jones has also claimed numerous times that the attacks were faked as part of a false flag operation.

Read the full letter from Koskoff, Koskoff and Bieder below: 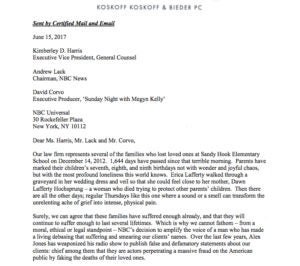 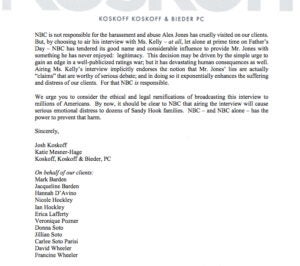 The firm declined to comment on whether it would sue NBC over the broadcast.  But if the families did sue the network, they would have a difficult time winning their case, experts told TheWrap.

Experts say that courts typically dismiss emotional distress claims because such claims try to escape the First Amendment protections for truthful reports. The First Amendment also would require a showing that NBC knowingly published false statements about the Sandy Hook families, known as actual malice. None of those facts appear present, experts say.

Los Angeles media lawyer Kevin Vick of Jassy Vick Carolan, stressing that he was not commenting on the NBC case, explained that “courts usually reject emotional distress claims against the media because they are subject to First Amendment limitations.”

“Based upon that, it’s very difficult for plaintiffs to prevail on emotional distress claims agains the media, Vick told TheWrap.

Lincoln Bandlow of the law firm Fox Rothschild in Los Angeles told TheWrap, “I would agree that it is extremely rare to win such a case against the media.”

In rare cases, however, courts have refused to dismiss emotional distress claims, forcing the media to settle the cases out of court, presumably by paying the victims or their survivors.

In 2007, NBC was sued after Texas prosecutor Louis William Conradt Jr. fatally shot himself when police officers and an NBC camera crew came to his home during a 2006 pedophilia sting orchestrated not by police officers, but by “Dateline NBC” for its “To Catch a Predator” series, according to the lawsuit.

The dead man’s sister sued NBC for $105 million in damages, alleging that the network should be held responsible for intentional infliction of emotional distress and civil rights violations, among other claims. The claims were based on news gathering, not any broadcast.

U.S. District Judge Denny Chin of New York refused to dismiss the emotional distress claim in pre-trial motions, ruling that the network “placed itself squarely in the middle of a police operation, pushing the police to engage in tactics that were unnecessary and unwise, solely to generate more dramatic footage for a television show.”

“A reasonable jury could find that by doing so, NBC created a substantial risk of suicide or other harm, and that it engaged in conduct so outrageous and extreme that no civilized society should tolerate it,” Chin wrote.

NBC settled the case with the dead lawyer’s sister in 2008.

In California, a court refused to dismiss an emotional distress claim by young children who were upset when a reporter knocked on their door and, without parents present, informed them that their fellow playmate had been murdered, a fact yet not known to the children, Bandlow said.

In 1980, a Missouri newspaper was sued for negligent infliction of emotional distress for publishing the name and address of a woman who had been kidnaped and then escaped. The assailant, who was still at large, terrorized the woman with death threats. A Missouri appeals court refused to dismiss the case.

But none of these cases would apply to the emotional distress claim by Sandy Hook families, Bandlow said. “This does not present that kind of scenario and it would be extremely unlikely that such a claim would survive a motion to dismiss,” he said.

Ironically, Alex Jones has also demanded the interview with Kelly be cancelled, saying this week that “she lied to me” about the intent of the interview, and that she would misrepresent him and his views.