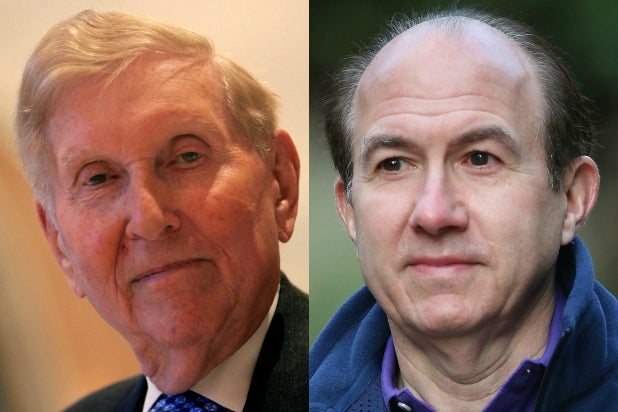 Philippe Dauman has perhaps one chance to save his job as Viacom chairman, president and CEO — and it begins right … about … now.

On Tuesday, Dauman and George Abrams will present their case to a Massachusetts court, asking a judge to overturn their removals last month from the Sumner M. Redstone Trust and the board of directors of National Amusements, Inc., the parent company of both Viacom and CBS.

The two are essentially pushing the legal system to reconsider previous decisions that have upheld 93-year-old Redstone’s mental competency, and thus his ability to oust Dauman and Abrams in the first place.

The stakes couldn’t really be higher, as Dauman (and the rest of the Viacom board, which includes Abrams) could be removed from his actual job(s) any day now, unless they’re able to override Redstone’s legal ability to make business decisions.

On Monday, Redstone raised the stakes again by using National Amusements to rewrite Viacom’s bylaws to block Dauman’s announced plans to sell a stake in Paramount Pictures by requiring a unanimous vote of the board — something that’s unlikely with both Redstone and his daughter, Shari Redstone, still on the board and opposed to a sale.

Even if the court managed to rule against Redstone, the aging mogul has other ways that he can upset the leadership at Viacom.

As TheWrap previously reported, the National Amusements board — which is currently made up of just four members, including Redstone and Shari — has the authority to add or subtract members from Viacom’s board and could potentially replace all of them.

The National Amusements board also controls Dauman’s director-level role at Viacom, and it’s unlikely you can be chairman of the board of directors if you’re not actually a director.

The ex-Redstone confidants believe that Shari is really the one behind their removals — and they’re not alone in that line of thinking. Even those who share the “Redstone” surname are crossing familial lines.

Last week, Sumner’s granddaughter, Keryn Redstone, accused her aunt Shari of kidnapping and brainwashing the aging media mogul. Dauman, who has the support of much of the Viacom board, has publicly accused Shari of “manipulation,” a charge that Sumner’s ex-girlfriend Manuela Herzer has also thrown around numerous times.

Not only do Dauman and Abrams assert that Redstone can’t “speak, stand, walk, eat, write or read” anymore, they also think he’s going to die soon. And that’s what makes the timeline here so important, the two contend.

(Ironically — or perhaps not — Dauman and Abrams used to fall on the opposite side of this competency argument, when they were serving as family trustees and Dauman additionally acted as Redstone’s healthcare agent. Now they’re just scrambling to stay employed.)

Unfortunately for Dauman and Abrams, Redstone has been found legally competent each time that’s been challenged to date. In a statement released Friday by the mogul’s family representatives, Dr. James Spar of the David Geffen School of Medicine at UCLA said that Redstone affirmed his decision about the execs — and was lucid enough to do so.

Spar wrote that Redstone appeared “well dressed and groomed, alert and in no distress, and quite cooperative with the examination.”

Of course, Dauman and Abrams are displeased by the fact that they weren’t given an opportunity to cross-examine the chairman emeritus. Today is their opportunity to possibly do just that.