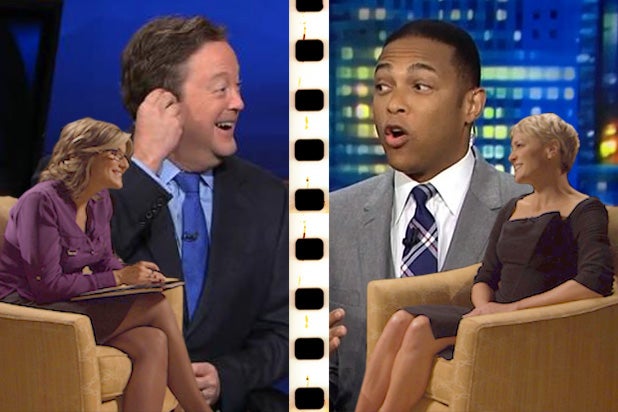 When producers of “Blue Palms,” a new series about a group of eccentric artists living in a dilapidated Hollywood apartment complex, announced the casting of their pilot, one name that stood out among the long list of actors was CNN anchor Don Lemon.

Producers of the series, which is not yet attached to a television network, were mum about whether Lemon will be playing himself or a fictional TV reporter. But they said getting Lemon to agree to join the show was nothing short of a coup.

“We were looking for someone who really had charisma,” “Blue Palms” executive producer Kim Sherrell told TheWrap. “Also, reporters who appear as themselves bring with them a certain authenticity to the role.”

However, a CNN representative disputed that Lemon will appear on the show.

Also Read: The Most and Least Liked TV Newscasters - From Scott Pelley to Chris Matthews

Reporters are well-known personalities, which is not a bad thing for a fledgling project looking to get buzz.

Journalists have often played themselves in TV and film over the years. CNN Chief International Correspondent Christiane Amanpour famously appeared in “Iron Man 2,” Brian Williams hung out at “30 Rock,” even the legendary Walter Cronkite made a cameo playing himself on an episode of “The Show.”

It’s not uncommon to see local newscasters from New York and Los Angeles pop up on the big and small screen as well.

“If a production is looking for a full-range performance, a professional actor is probably the way to go,” KTLA entertainment anchor Sam Rubin, who’s appeared in “Fantasic Four” and TNT’s “Rizzoli & Isles,” told TheWrap. “But often these are parts that are just a few lines and ‘the real thing’ may convey the message of the scene better than someone trying to do what we do every day.”

Rubin’s colleague, KTLA weekend anchor Rick Chambers, is one the most sought after TV newscasters in Hollywood. His resume could make some veteran actors squeal with envy. In the last couple of years, he’s had prominent roles in the Jake Gyllenhaal thriller “Nightcrawler,” 2014’s “Teenage Mutant Ninja Turtles,” Denzel Washington‘s “Unstoppable” and he’s appeared in a string of television roles.

But casting journalists in fictional films and TV shows is not without controversy.

Back in 1997, CNN came under fire after several of its on-air reporters including anchor Bernard Shaw portrayed themselves in “Contact,” the science fiction movie starring Jodie Foster. Since then, journalism purists have wrinkled their noses at the trend, arguing that it blurs the line between news and entertainment. Others in the acting community feel real reporters have no business in show business.

Another big issue, according to Johnson, is that newscasters are taking away much-needed work from struggling actors.

“It’s disheartening,” said Johnson. “When well-known and well-compensated news readers get hired to play themselves or a fictional reporter, not only do they take a job away from a trained actor, but they damage those actors’ ability to qualify for pension and health benefits.”

But Rubin counters that casting directors know exactly what they’re getting when they hire real reporters.

Banfield also pointed out that most newscasters don’t take on these roles very often.

“It’s not an epidemic, so I think that’s an unnecessary concern,” Banfield said. “Actors aren’t going to be out of work because of a dozen small gigs that are going to journalists.”

“Famous actors are now taking jobs as hosts and other aspects of ‘personality based TV,’ that in the past may have gone to news reporters,” he said.

Playing a newscaster on TV or a movie won’t make you rich. Rates can vary depending on the movie’s budget or whether the show is on cable or network TV. Roles that have under five lines typically pay about $1,000 a day, per SAG-AFTRA rules. The more lines a reporter gets, the more the role pays.

For Banfield, it wasn’t about the money, but the opportunity to do something new and shake things up a bit.

“It was a great experience and it allowed me to broaden my horizons when it comes to the inner-workings of Hollywood,” she explained. “Also, I always make sure I have an out in case the script is problematic or just inappropriate.”