Vin Diesel could have used a little help from his “Fast and Furious” pals this weekend.

His latest starring turn in “The Last Witch Hunter” — a pricey production at $75 million-plus — took a stake through the heart at the box office with its $11.2 million opening this weekend. The star, who rouses a global following in his franchise films, continues to have a much tougher time as a leading man outside of them.

Diesel’s last four franchise films — “Furious 7,” “Guardians of the Galaxy,” “Fast and Furious 6” and “Fast 5” — have opened to an impressive $106 million on average. His previous four films when he’s on his own — “Witch Hunter,” “Riddick,” “Babylon A.D.” and “The Pacifier” — have debuted to a little more than $17 million. 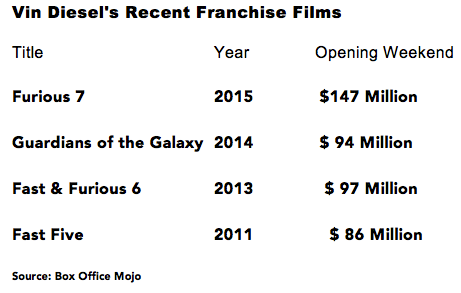 Also Read: 'The Martian' Back on Top as Newcomers Bomb at Box Office

The total worldwide grosses on his recent franchise films is an eye-popping $3.7 billion.

On the non-franchise films — projecting a $100 million global gross for “Last Witch Hunter” — he’s around $468 million.

“Vin Diesel is a huge global superstar, but obviously within the framework of the ‘Furious’ franchise he’s perfectly in his wheelhouse and audiences love him in that role,” said Rentrak senior media analyst Paul Dergarabedian. “In other films I think it just comes down to the innate appeal of the material and as we seen with many franchise stars, they often enjoy their biggest successes in the movies that they have been consistently associated with over the years.” 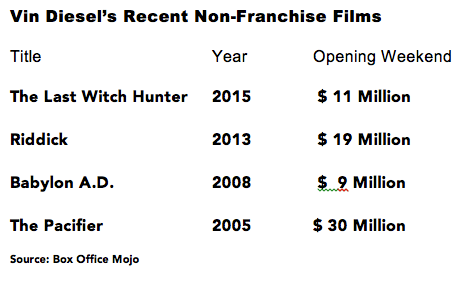 “The Last Witch Hunter” is a financial setback for Lionsgate, which declined to comment for this story. Foreign pre-sales offset the bulk of the $75 million action fantasy’s cost, but the ultimate hit on the studio’s bottom line could go as high as $20 million. “The Last Witch Hunter” did better overseas, amassing $13.4 million from 53 territories and finishing first in 23 markets.

Studios and producers who write off Diesel outside of the franchise films could be making a mistake, Dergarabedian said.

“All it takes is the right solo lead role in the right movie at the right time — like Dwayne Johnson in the hit ‘San Andreas’ — and a superstar like Diesel can have a breakout hit all his own,” he said.

Elijah Wood, Julie Engelbrecht and Rose Leslie co-starred in “The Last Witch Hunter,” in which Diesel, at times in a beard and hairpiece, plays an immortal witch hunter plying his trade in New York. The extensive CGI and special effects work has a lot to do with the budget rising so high.

“The Last Witch Hunter”  took a beating from critics, and was at just 14 percent positive going into Friday’s opening. Moviegoers were more impressed, but marginally, and gave it a “B-” CinemaScore.