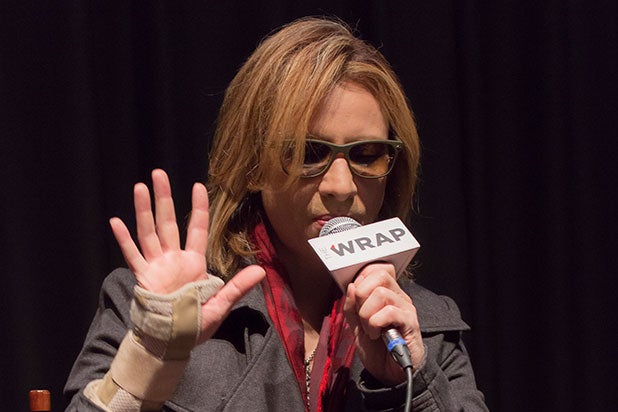 Stephen Kijak’s latest music documentary “We Are X” chronicles the rise and fall of rock band X Japan, as well as physical and emotional demons that drummer Yoshiki faced since the band’s formation in 1982. But Yoshiki initially didn’t want the documentary to be made.

“First of all, I didn’t want to do this film,” the drummer said at TheWrap’s Screening Series at the Landmark Theater on Thursday. “It was too painful to talk about, too painful to remember each sad moment. My agent, William Morris Endeavour, asked me if we want to do this film. I said no because, you know, too painful. Then it took more than several years. [My agent said], ‘This story is very important. We need to spread this story because this story may help people or save people’s lives.’ And then I was pretty much convinced.”

In the doc, the drummer’s body is plagued with tendinitis, and a neck and wrist injury, while his brain is tarnished by the suicide of his father when Yoshiki was just 10.

“Talking about my father’s death, describing that moment was pretty hard but, at the same time, it’s kind of therapeutic,” he added. “There were things I didn’t want to touch, but then I started opening the door a little and then opened it all the way. I’m glad I did that.”

The band faced several members leaving before lead guitarist, hide, died in 1998 of suicide. The band disbanded in 1997 when vocalist Toshi exited because he was “brainwashed” by a cult. Ten years later, Toshi visited Yoshiki in Los Angeles to work on the song, “Without You” as a tribute to hide, and rumors of X Japan reuniting started surfacing. The band soon announced their world tour and performance at Madison Square Garden. Now, their sixth studio album will be released on digital release on iTunes next March.

The bassist of the band, Taiji, died in 2011. After he was arrested for interference with a flight attendant on a plane, Taiji hung himself with a bed sheet in prison.

Lucky for Kijak, Yoshiki did agree to do the doc and the entirety of the band’s life had been documented on video by the drummer himself.

“My mother thought I wasn’t going to live long, so my mom told everyone to ‘film everything while you still have Yoshiki,'” he said.

“Yoshiki has a warehouse of footage — the archive log is as big as the bible and he has been filming since the beginning of the band,” added Kijak. “Usually you are searching the globe for those rare gems … but he had them all … Every show was filmed with at least 10 to 30 cameras, behind the scenes, daily life — it was all filmed. Having that at our disposal was an unbelievable gift. And some things weren’t marked, so I’m watching and all of a sudden he’s naked on a beach and David Lynch is shouting at him on the beach.”

Kijak revealed that he had a lot of creative freedom to work on “We Are X,” that Yoshiki didn’t see the documentary until it was accepted into Sundance.

“There was a reason,” said Yoshiki. “Before the band broke up, we did ‘The Last Live,’ and I could not watch the concert footage. I said, ‘I’ll give the director everything, I’m not going to touch it because just thinking about this.’ I broke into tears. To be honest, I cried a lot, then I couldn’t say a word, but I thought it was good because it gave me positive feeling and that’s what I was looking for.”

Before the documentary was made, the only thing Yoshiki asked Kijak was “please make this film somehow positive. Because this film could turn into horror film.”

TheWrap's Screening Series features the most significant films of 2016. Screenings are followed by question-and-answer sessions with the film's talent. The films are open to members of the Academy of Motion Picture Arts and Sciences, the DGA, PGA and WGA members, and to subscribers to TheWrap's daily email newsletter, First Take.
KEEP READING..