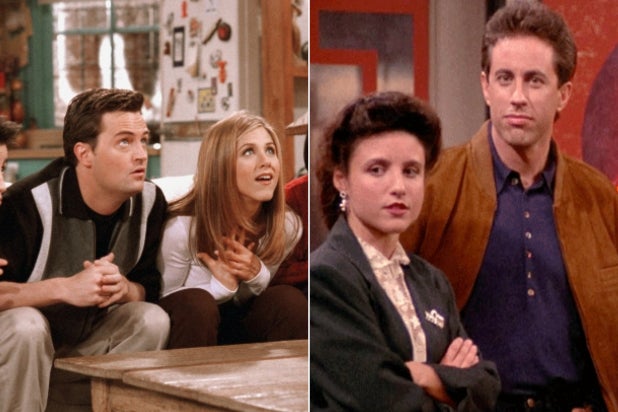 NBCUniversal’s Peacock features numerous fan favorite NBC sitcoms like “30 Rock,” “Cheers,” “Frasier” and, eventually, “The Office.” But two of its “Must See” shows are noticeably absent from its slate of streamed offerings–“Friends” and Seinfeld,” both of which are on available on competing platforms.

That’s because, while most viewers would think of those two 90’s-era sitcoms as NBC shows, they are actually owned by someone else. Once “Friends” and “Seinfeld” left NBC’s airwaves, they were no longer the network’s property.

“Friends” was produced by Warner Bros. TV and thus owned by WarnerMedia, which just so happens to have its own streaming service, HBO Max. While WarnerMedia paid a pretty penny to get “Friends” exclusive for HBO Max (it had aired been streaming in Netflix), WarnerMedia’s parent company AT&T had been pretty much signaled they were going keep the popular sitcom for itself. They just had to make sure that all profit participants, including the show’s creator and cast, would get their fair share on the open market.

“Seinfeld” was owned jointly by Castle Rock Entertainment — which counts Warner Bros. as its parent company — and the show’s creators Jerry Seinfeld and Larry David. Sony Pictures Television has distribution rights, meaning it’s Sony and David/Seinfeld, rather than Warner Bros., who gets to decide where the show ended up. It will move from Hulu to Netflix next year in a massive deal worth more than $500 million.

Shows like “30 Rock,” “The Office” and “Parks and Recreation” are owned by Universal Television, which gave them a much clearer pathway to Peacock. But even then, it forced NBCU to amend some existing licensing contracts to get those shows onto its service. For example, “30 Rock” will still be available on Hulu until October, while “The Office” won’t come to Peacock until next year, after its Netflix deal expires.

For similarly-aged shows like “Frasier” and “Cheers,” NBCUniversal was able to reach an agreement with ViacomCBS, who handle its distribution. “Frasier” had been available on CBS All Access, given CBS’ ownership of the show, while “Cheers” had been running on Netflix but will leave for Peacock this month. NBCUniversal also signed big licensing agreements with ViacomCBS and A+E Networks to bolster its library offerings.

Over the last decade, giant media conglomerates have been commissioning more TV series from in-house studios, which is why you’ll now find most of NBC’s primetime lineup coming out of Universal Television. While second runs for broadcast TV series are nothing new — broadcast and cable syndication have long been a money-making enterprise for studios — the advent of streaming, with its unlimited shelf space, opened up a massive new revenue stream.

It makes more sense for broadcast networks to prioritize their in-house operations when deciding which new shows to pick up in order to help their parent company cash in down the road.