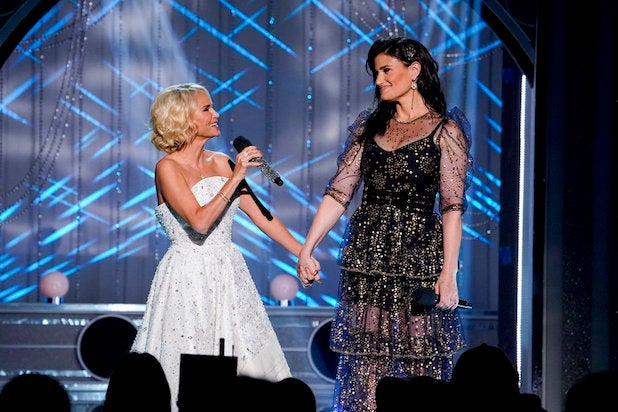 Something “Wicked” helped NBC top CBS in the 10 o’clock hour among adults 18-49 last night, though it was two hours of “The Voice” that paved the way for a primetime ratings win. Plus, NBC’s “A Very Wicked Halloween” ended up behind both “Bull” and “The Good Doctor” in terms of overall audience members.

NBC finished first in ratings on Monday thanks to its reality singing competition, but ABC was No. 1 in total viewers with “Dancing With the Stars” and NFL preemptions in Buffalo and New England.

The below fast-national Nielsen numbers for ABC are subject to downward adjustment.

NBC was first in ratings with a 1.5 rating/6 share in the advertiser-coveted 18-49 demographic and second in total viewers with an average of 7.6 million, according to preliminary numbers. “The Voice” at 8 p.m. earned a 1.8/7 and 9.3 million viewers. The “Wicked” Halloween special at 10 received a 1.0/4 and 4 million viewers.

ABC and Fox tied for second in ratings, both with a 1.2/5. ABC was first in total viewers with 8.1 million, Fox was fourth with 5.3 million.

Telemundo and The CW tied for sixth in ratings, both with a 0.4. Telemundo had a 2 share, The CW had a 1. Telemundo was sixth in total viewers with 1.2 million, The CW was seventh with 1.1 million.