“Will & Grace” is in one of the most interesting positions a TV show has ever been in. As a sitcom that began airing in 1998, went off the air after eight seasons, and then was revived in 2017, it exists in two different cultural eras. It’s considered one of the most influential sitcoms of all time, but it won’t have the same impact as it originally did when Season 9 premieres Thursday.

The show even addresses this conundrum. In the second episode of the revival, Will (Eric McCormack) goes on a date with a man in his 20s and realizes that the generational divide might be too great to cross.

This isn’t “Will & Grace’s” fault. The show was considered groundbreaking when it premiered in 1998, a time when complex LGBTQ characters were just starting to emerge on mainstream shows like “My So-Called Life” and “Ellen,” same sex marriage wasn’t legal anywhere in the world (the Netherlands was first in modern times in 2001).

“Will & Grace” provided much-needed visibility to the LGBTQ community and was one of the first shows to have gay men openly talking about sex, but it might not be enough to endear the revival to a younger audience who’s more used to open acceptance, legal same-sex marriage, and is tired of stereotypes.

“When it was first announced that it was coming back, for my generation, it was a no-brainer. It was a celebration and there was no idea that there would be any kind of backlash,” said Jim Colucci, journalist and fauthor of “Will And Grace: Fabulously Uncensored.” However, he added, “I understand the skepticism and people wondering, ‘Can it be relevant?'”

“I was out [of the closet] before Stonewall,” said Michael Bronski, a professor of the practice of activism and media at Harvard University, referring to the 1969 demonstrations. “‘Will & Grace’ really spoke to people my age and a little younger. I don’t think it speaks to my gay students now … I think ‘Will & Grace’ was popular because it really spoke to people born in the mid-to-later ’50s, who were raised on TV sitcoms.”

Also Read: I Don't Care if 'Will & Grace' Teaches Me Anything - It Just Needs to Be Funny (Commentary)

And “Will & Grace” is almost the perfect evolution for those classic sitcoms. Tom Nunan, the former head of NBC Studios who is now a lecturer at the UCLA School of Theater, Film and Television, was the executive working to sell the sitcom to the network at the time. In a conversation with TheWrap, he said how the show succeeds because of those influences.

“It was in this great tradition of Norman Lear comedies — let’s call them socially-conscious comedies from the 1970s,” he explained. “There hadn’t been a show like that since ‘Maude’ or ‘The Mary Tyler Moore Show.’ They dealt with real issues in an outrageous way.”

“Will & Grace” came around at the right time in culture not only because LGBTQ characters were finally getting their due on screen, but because, according to Nunan, TV hadn’t seen this kind of sitcom in a long time. Shows like “Murphy Brown” carried on the tradition, but few besides that were standouts in terms of writing or acting.

Despite that legacy, it wasn’t perfect. “Will & Grace” is remembered as the show that increased the conversation surrounding homosexuality in America by presenting a story where two of its main characters were gay. However, it was strictly a New York sitcom that depicted members of the upper middle class and the top one percent, so it wasn’t exactly down to Earth and universally accessible. The four main characters are white and privileged and a lot of the more prolific characters of color were Karen’s (Megan Mullally) servants. 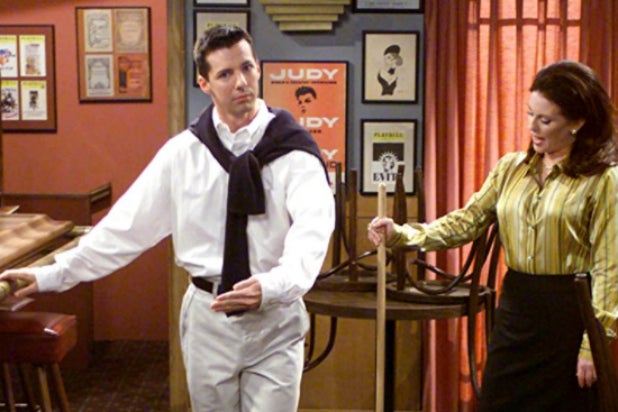 It also left a lot out in terms of LGBTQ visibility. While NBC went forward with two gay characters as stars, it didn’t show a kiss until Season 2. Debra Messing (who played Grace) said last month that “Will & Grace” was going to include more of the spectrum in the revival (“We were ‘LGB,’ but we stopped at B. My hope is we can now finish the alphabet,” she said), but the original series featured no transgender characters.

“For all that it did for gay visibility, it could never by design be too controversial as to alienate its straight audience,” Andre Cavalcante, an assistant professor of media studies at the University of Virginia, said in an email to TheWrap. “Will, Grace, Jack and Karen existed in a straight world.”

Bronski said the show was “completely trading in on stereotypes” with Will and Jack. The latter is a prime example of the promiscuous, flamboyant queen while the former is more of a comedy trope about the uptight, clean businessman. Even the two women — Grace and Karen — are stereotypes. Grace is an overbearing Jewish woman and Karen is a ultra-conservative rich socialite.

“We live in a culture where stereotypes tend to communicate very quickly and effectively but incompletely,” he added.

However, Bronski also notes that “Will & Grace” did manage to subvert expectations. It didn’t fall completely on tropes to shape its characters.

“I think introducing people to a lot of types, even stereotypes is a good thing,” he said.

And whether it still holds that social power today, “Will & Grace” did help to move along the conversation surrounding homosexuality into a lot of homes. It’s unfair to say it was responsible for strides made in the 2000s, specifically with the legalization of same-sex marriage, but the representation did help many see gay people for the first time.

“Will & Grace had an undeniable impact on our culture when it originally ran and our culture will once again benefit from its unique formula of infusing current events into hilarious, relatable, and entertaining storylines,” GLAAD President and CEO Sarah Kate Ellis said in a statement. ”

According to a Wired article from 2013, back in 2008 the Gay and Lesbian Alliance Against Defamation and a team from Harris Interactive did a survey of 2,000 people and found that two in 10 adults had changed their views of gays and lesbians in the previous five years to a more favorable one because they knew a gay person. Thirty four percent of participants said they were influenced by seeing LGBTQ characters on TV.

Nowadays, knowing a gay person is common. A Pew Research center study released in 2016 found that around 87 percent of adults know a gay person. Societal views towards homosexuality have generally changed.

Nunan believes that “Will & Grace” still has relevance today just based on that historical context. He points to the short released near the 2016 election that resulted in the show getting revived.

“It reminded us, ‘wow our old friends are just as smart and bitingly clever and relevant as they were when they left the stage 10 years go,” he said.

Also Read: Sean Hayes Regrets Not Coming Out as Gay During 'Will & Grace' First Run

Nunan was there during pitch meetings back in the ’90s and said that at the time, he thought it was one of the most original shows out there.

“There had never been a show where essentially there is a man and a woman at the center, so it feels like a romantic comedy but it’s literally an impossible comedy because of their sexual orientation,” he said. “It’s the best idea I had heard — I think I’ve heard ever — as a network president and everything else.”

Since, he added, “it’s been kind of disappointing for me to watch the networks not put on shows that are even more daring and outrageous than ‘Will & Grace.’

And “Will & Grace” won’t be the exact same show that debuted in 1998. As previously noted, it will feature conversations about transgender people. Ellis notes that more representation will only help the cultural conversation.

“LGBTQ acceptance today is slipping across the country — with bullying and hate crimes on the rise — so a show that educates, enlightens, and entertains is not only timely, it’s necessary,” she said. “Though LGBTQ representation on TV is growing, all shows and networks should raise the bar when it comes to showcasing the diversity of the LGBTQ community, however not all of them can do so with the laughs and the class of a show like ‘Will & Grace.'”

So there’s still room to grow for the traditional sitcom. Whether younger audiences, such as millennials, will tune in isn’t clear. However, there’s the nostalgia factor of seeing a classic show come back as if it never left, the audience reintroducing themselves to characters like they were old friends, and seeing some more LGBTQ representation on screen — and that might be enough.

“Who doesn’t know a gay guy whose outrageous and hilarious and super smart at the same time?” Nunan said. “That character is usually set off to the side, not in the center of the show. I’m really looking forward to it.”‘