You might find yourself laughing in spite of yourself at “The Millers.” I know I did. 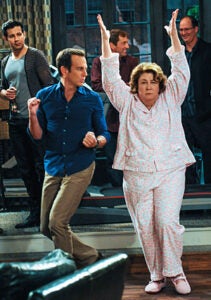 The CBS comedy, about a newly divorced TV reporter who inspires his bickering parents to split, gets off to a creaky start: Nathan (Will Arnett) visits sister Debbie (Jayma Mays) and husband Adam (Nelson Franklin), who offer him a comically healthy smoothie from their money-losing cafe.

There’s a laugh track. Parents Carol (Margo Martindale) and Tom (Beau Bridges) call from Myrtle Beach and argue with each other via split screen about toothpaste.

So far, nothing to write home about.

“The Millers” begins to hit its stride when the parents learn the truth about Nathan’s marriage. Sputtering with disbelief — and trying to cough up a sleeping pill in his mother’s case — the parents break up on the spot. They then proceed to drive their children bonkers with their habits: Carol is bossy while absentminded Tom sets his daughter’s microwave on fire and tries to figure out the remotes.

Again, nothing extraordinary. But the interactions between Arnett and his TV parents click nicely. Arnett and Martindale play off each other especially well when they become new roomies, and Bridges holds his own.

The episode culminates in a party at Nathan’s house that involves “Dirty Dancing” and pink pajamas. Somehow, Arnett and Martindale even manage to make a fart joke funny.

“This is either going to be very sweet or very creepy,” Nathan’s pal Ray (J.B. Smoove) remarks.