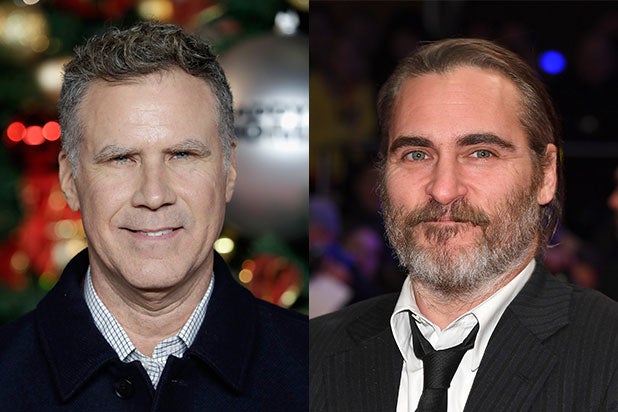 Will Ferrell has called Joaquin Phoenix “a little bitch” in a new interview in Interview Magazine — and you just have to read the entire conversation because it’s completely bonkers yet absolute gold.

Phoenix and Ferrell talk about the Super Bowl, social media and Phoenix’s upcoming movies “You Were Never Really Here,” “The Sisters Brothers” and “Don’t Worry, He Won’t Get Far on Foot.”

Phoenix also reveals that he is trying to hop on the honesty train and that he doesn’t really understand the concept of Valentine’s Day, while Ferrell admits that he’s really not great at being a professional interviewer. And Phoenix agrees, calling Ferrell “so f—ing unprofessional.”

You can read the entire Interview article here. See below for 9 hilarious bits.

PHOENIX: Did you know that it’s Valentine’s Day?

FERRELL: I did. I’m going to a group Valentine’s Day dinner with my wife and four other friends.

PHOENIX: That sounds awful. Can I ask you a question? What is Valentine’s Day?

2. Phoenix Wants to Call the Interview as Soon as It Starts

PHOENIX: Or we could call it right now. Why not? Don’t you hate when these interviews drag on and on, and it’s like, “F— it, I’ve got things to do. I don’t have time to sit around and read this bulls—.”

FERRELL: Let’s just call it. That would look so funny in print.

3. Phoenix Doesn’t Know Whether He’s Doing the Interview to Promote a Movie

FERRELL: Are you doing this interview to promote something specific?

PHOENIX: Honestly, I have no idea. I do appear in a few movies that are coming out at some point this year.

4. Phoenix Regrets Riding a Horse in “The Sisters Brothers”

PHOENIX: I didn’t like riding horses. I actually regretted having to ride. I’m a little clueless, because I don’t think that I really thought about it that much until I was there and realized, “Oh, it’s a Western and we’re on horses a lot.” I hadn’t really considered that. I felt bad about riding them. I had the feeling that they were like, “I don’t really want you on my back.”

FERRELL: But they tell you that the horses love it.

PHOENIX: Yeah, but the horses tell you something different. I’m really bumming out this interview, man. [laughs] I’m sorry.

FERRELL: Let me ask you this. I’m terrible at giving advice. I always feel like I’m letting people down when I’m asked professional advice about the biz. How do you feel about your ability to give advice?

PHOENIX: Nah, I got nothing.

PHOENIX: Well, thank you, but I don’t really know what your taste is. You might have terrible taste.

FERRELL: I love everything. I was recently thinking about your role in “Gladiator” [2000], which is a big studio movie.

PHOENIX: Are you reading off prepared questions and trying to pretend that they’re just popping into your head?

FERRELL: Maybe wait to hear what I have to say: I was thinking about your role in that movie, and the reason why it works is because you’re such a little bitch.

PHOENIX: [laughs] I don’t know if that’s why the movie works. It probably had something to do with Ridley Scott.

FERRELL: In your personal life, are you sometimes a little bitch?

FERRELL: Can you get a little bitchy if you’re in a bad mood?

PHOENIX: Definitely. You can ask [John C.] Reilly about that. I think I tortured him the first couple of weeks, maybe the entire shoot.

FERRELL: Okay. How would he have reacted if you were like, “Hey! M. Night Shyamalamadingdong! Can I ask you about this one camera shot?”

PHOENIX: Having been teased most of my childhood about my name–

FERRELL: You’re sensitive to that area.

8. Phoenix Is Trying to Hop on the Honesty Train

FERRELL: Well, next year I’ll invite you over to watch the Super Bowl.

PHOENIX: You don’t have to.

FERRELL: You don’t even have to watch it.

PHOENIX: I’m trying to do this thing where I’m being honest with people — I don’t want to come. But I’d love to come over to check out your bananas sometime.

FERRELL: We have three boys who are very much into sports, and they’re like, “We’re watching the Super Bowl, right Dad?” Even though we have no affiliation with the two teams who were playing. But there was such disdain for the New England Patriots because they’ve won it so many times that everyone at our house was pulling for the Eagles as if that was our home team–screaming and yelling and falling over and hanging on to every play. [Ferrell to his wife] Oh, hello.

PHOENIX: This is so f—ing unprofessional. I can’t believe you’re doing this. [Phoenix to his dog] Come here. Honey, come here.