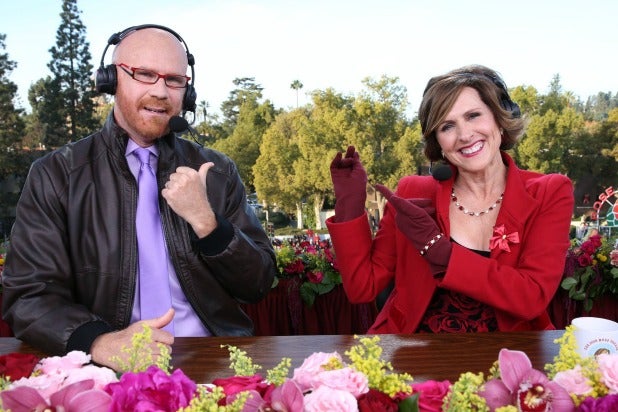 If you don’t get it, you don’t get it. But for viewers who understood the parody stylings of Molly Shannon and Will Ferrell, the 2018 Rose Parade was a fantastic way to spend their morning on New Year’s Day.

Shannon and Ferrell acted as commentators for the festivities leading up to the Rose Bowl college football game in Pasadena on Monday, but did so in-character as Cord Hosenbeck and Tish Cattigan. And, of course, the fake TV personalities completely upstaged everything that was going on behind them with one-liners that only the “Saturday Night Live” alums could whip out on the spot.

Cord and Tish tackled topics like Donald Trump (and the kind of high school he would profit from running), freezing sperm, George Bailey’s attempted suicide in “It’s a Wonderful Life” and the preposterousness of some of the participants in the parade (well, tigers shouldn’t be allowed to drive cars, we guess).

Also Read: 11 Most Out-There 'Cord and Tish' Comments on the Rose Parade

Fellow “SNL” alum Tim Meadows acted as their correspondent on the ground — playing a very bummed out version of himself. “Well for 2018, I think I am going to let the world fall apart like it’s already doing,” Meadows said, in one of his best lines of the day.

The event was a collaboration between Funny or Die and Amazon Prime, who partnered to create the live coverage that began streaming on New Year’s Day at 11 a.m. ET.

See some of the best tweets in reaction to Cord and Tish’s hosting gig below.

This is amazing. Someone @amazon needs a raise. #CordandTish

If I don't watch another parade again after today I'm ok because I'm witnessing the Holy Grail of parade coverage:

"Hold on. It's a tiger driving a car! It's preposterous! A tiger would drive in the crowd and rip people up!"
#CordandTish

Tish: Can you imagine a Trump High School?
Cord: Not a public one. Maybe one where you can buy a high school degree without ever going to class though.
????????#CordandTish

#CordandTish talking about George Bailey's attempted suicide in "It's a Wonderful Life" is everything. #RoseParade

#CordAndTish have been providing commentary for two hours with NO commercial breaks. Can we take a moment and recognize how damn impressive that is?

People who don't get #CordandTish and are angry tweeting @amazonprimenow should just delete Twitter.

Tim Meadows: Well for 2018, I think I am going to let the world fall apart like it’s already doing.#CordandTish

Madonna, Katy, Justin, Miley and more sent 2016 packing in their own special ways

Liam Hemsworth plants one on his lady love, Miley Cyrus.