Yes, the two actors — who will soon be seen starring together in the musical Christmas movie “Spirited” — swapped appearances, but without ever actually saying that’s what they were doing. The bit was pretty good, as both Reynolds and Ferrell were laser-focused on talking about each others’ lives and projects in their mission to be the best fill-in ever.

For Ferrell, that meant hyping up Reynolds’ new Netflix movie “Red Notice” (out Nov. 12), despite the fact he has not seen a bit of it — other than the clip Kimmel played for him during the show. Then he answered several personal questions meant for Reynolds about wife Blake Lively (who apparently makes “killer nachos”) and their children (who, according to Ferrell, went as Deadpool, Canadian Prime Minister Justin Trudeau and Deadpool for Halloween). 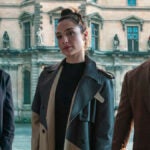 Also Read:
How to Watch ‘Red Notice': Is the New Dwayne Johnson Movie in Theaters?

Ferrell, who is American, also explained what the recent “snap election” in Canada (Reynolds’ home country) is all about: “It’s a term that just means, ‘Get it over super quick, because we could give a s—.’ Yeah. Snap election!”

When “The Shrink Next Door” star was asked to rap — something Reynolds learned to do during lockdown — he did so in French (according to him) and then claimed what he had rapped was “the plot of ‘Red Notice.'”

You can watch Ferrell’s appearance via the video above.

Meanwhile, Reynolds took Ferrell’s slot on “The Tonight Show Starring Jimmy Fallon,” and he couldn’t pick out the plot of “The Shrink Next Door” if he tried — but that didn’t stop him from trying.

According to Reynolds, “The Shrink Next Door” is actually part of the MCU, and connects with Paul Rudd’s story as Ant-Man. Fallon wasn’t quite buying it, but Reynolds insisted that, at the very least, it was “Ant-Man-adjacent.”

Also Read:
Apple TV+ ‘The Shrink Next Door’ Review: Paul Rudd and Will Ferrell’s Riveting Exposé of a Bad Doctor

When that failed, he tried to convince Fallon that “The Shrink Next Door” was actually “Honey, I Shrunk the Kids.” That also failed spectacularly, but gave Fallon a good laugh.

For his part, Fallon did try to get Reynolds to answer questions about his own life and his own upcoming film, “Red Notice,” but Reynolds wouldn’t answer them or any personal questions about Blake Lively and his kids. Fallon did actually give a nod to “Spirited,” but Reynolds made sure it devolved into a conversation about the first time he and Ferrell worked together, on a movie called “Dick” (and no, that’s not a joke).

You can watch Reynolds’ full segment on “The Tonight Show” below.