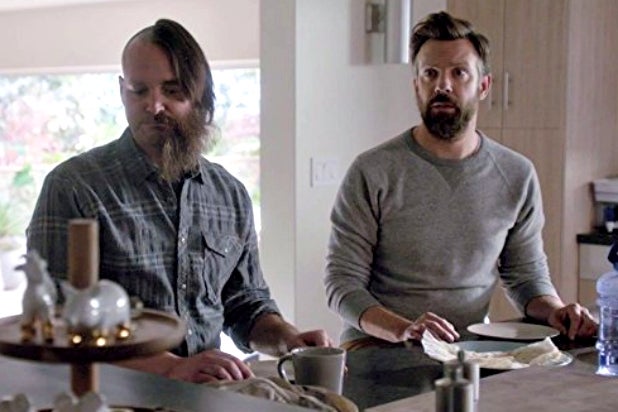 (Editor’s note: Do not read this post if you’ve yet to watch Fox’s “Last Man on Earth” Season 2 finale. Spoilers exist — you’ve been warned.)

Will Forte‘s Phil “Tandy” Miller hasn’t been the actual “Last Man on Earth” for a while now, but it seems like he’s once again the last Miller man left.

Phil, whose new nickname this season was “Skidmark,” bid a beautiful goodbye to his apparently dying brother Mike (Jason Sudeikis) during the Fox comedy’s Season 2 finale Sunday. Mike, an astronaut who recently came back down to Earth, came down with the virus that killed off the rest of humanity, sans our handful of survivors.

The final farewell between the two quarreling sitcom siblings was quite touching — feelings that carried on when the cameras were off, Forte told TheWrap.

“It was very emotional the whole way through doing that stuff with him — most of it was positive emotion,” Forte said. “This is a guy that I used to spend pretty much every day of my life with when we were at ‘SNL.'”

“We got to be really, really close toward the end [of ‘SNL’], like brothers,” he continued. “That’s why it was so obvious when we were thinking about having a brother character … the first person to ask [was] obviously Jason Sudeikis.”

While Mike Miller is presumably gone for good, we also discovered tonight that Pat Brown (Mark Boone Junior) is back. For those who don’t remember, Pat’s the guy who first found and saved Mike, welcoming him aboard his sailboat. Pat’s also the super-weird dude who tried to kill the same Sudeikis character at least once.

For some reason, the ornery seaman’s vessel is now anchored off the Malibu coast, and he’s coming for the gang. Making matters even scarier, he’s not alone: Two hazmat-suited men were by his side and headed straight for the mansion when the episode cut to end credits.

Should we assume that Pat was flying those drones discovered by a drunk Gail (Mary Steenburgen)? “You can assume what you want,” Forte said. “We love for people to assume stuff.”

Of course, when a zig like this one happens, storytellers tend to set you up for a good zag.

“We’re still working out all the particulars,” Forte admitted of the person behind the drone controls.

“Hopefully people think that he’s flying that drone — and maybe he is!” he continued. “It’d be pretty cool if he wasn’t, right?”

Yes, it would be.

“The Last Man on Earth” has been renewed for Season 3. Forte can currently be seen in feature film “Keanu,” and he is shooting National Lampoon co-founder Doug Kenney biopic, “A Futile & Stupid Gesture.”