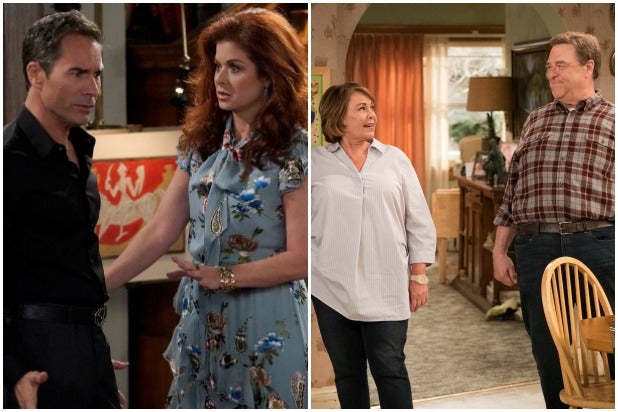 Revivals are the new, well, everything on TV right now.

And while “Roseanne” has been the talk of the town since its monstrous return to ABC last week, and more series are being brought back to life as we speak — we’re looking at you, CBS’ “Murphy Brown” — “Will & Grace” still has bragging rights when it comes to who pulled off a successful comeback first.

Though Max Mutchnick and David Kohan — the co-creators and showrunners of NBC’s old/new hit — told TheWrap in an interview last week that the green-eyed monster has not come by to flaunt Roseanne Barr’s impressive TV ratings in their faces or remind them they started the revival trend last fall.

“There’s not one part of us that’s jealous of anyone else’s success,” Mutchnick said. “And the more that sitcoms do better on network television, the better for us. That’s about as much of a line as we can draw to meeting our own needs. We love the idea that sitcoms are being made and that they do well. That’s only a good thing.”

“The more important thing is the reason,” Kohan added. “Why are people more comfortable now going to things that were? To me, it seems like it brings you back to calmer, happier, less chaotic times. Let’s put it that way.”

“Will & Grace” really doesn’t have much to be jealous about, as the series is seeing nothing but love from its own network, which picked it up for Season 2 before the revival premiered at the start of the 2017-2018 TV season. Oh, and the Peacock recently granted it a third season and upped the episode count for the sophomore installment. (“Roseanne” received its own Season 2 pickup within a week of its debut).

So what do Kohan and Mutchnick think upcoming revivals can learn from the success “Will & Grace” has seen?

Also Read: 'Roseanne' Revival Renewed by ABC for Another Season

“We cast great actors, to be honest,” Kohan said, pointing to leads Debra Messing, Eric McCormack, Megan Mullally and Sean Hayes — who all came back for the comedy’s second go-round. “That’s the first thing that we did well. That we have these four actors who are so good and so capable. They are so able to do whatever you throw at them. Their characters at this point are so well defined, that it makes it — you know when you are going in a weird direction with a character because the character tells you and the actor lets you know.”

“So that’s one thing. But also have a reason in your mind for why you want to do it,” Kohan added about the decision to bring back a beloved show. “And I can understand ‘Roseanne.’ It makes perfect sense to me why they brought that back. There was just that article, where [Disney-ABC TV President] Ben Sherwood was like, ‘We need to take into consideration these people.’ It was right after the election I think, that he convened a meeting, like, ‘How do we talk to those people?’ And ‘Murphy Brown’ was political. These are highly-politicized times. It makes perfect sense that ‘Murphy Brown’ is coming back.”

Indeed, politics is part of it, with “Roseanne”s debut having sparked a week’s worth of conversations about the Conner family being Trump supporters — not to mention the show’s leading lady’s professed love for POTUS.

But on the other end of the spectrum is “Will & Grace,” which some critics believe is packed with too much commentary on Trump’s administration. To that Kohan said the show didn’t set out to focus on politics, it just happened organically.

“It wasn’t like, ‘Right now our goal is to be some kind of political soapbox.’ These characters would have that kind of attitude,” Kohan said. “And it’s interesting, because I think some people like it, and some people are bothered by it being political. But I don’t see it really as political. It certainly isn’t anti-Trump voter. But it is anti-Trump, because these characters — it has nothing to do with Republicans or Democrats, it really is the person who occupies the Oval Office. And I think they are just offended by it as characters.”