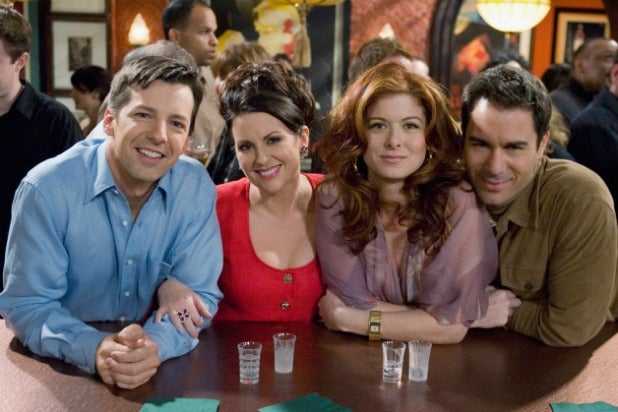 (Warning: Contains spoilers for Thursday’s season premiere of “Will and Grace.”)

After 11 years and a hell of a lot of societal changes, “Will & Grace” made its return Thursday night. And judging from the reaction of fans on Twitter, NBC will definitely not regret bringing the groundbreaking show back for another season.

But first up, the show had to deal with its much-debated original series finale. The last episode of season eight went several decades into the futures of the four leads, and featured, among other things, marriages, children, and a 22-years-long falling out between the two title characters. (Yes, it was a bummer.) The show was clearly going to have to come up with a clever way to explain how tonight’s ninth season opener could pick up less than halfway through Will and Grace’s not-speaking-to-each-other period.

The answer? Think “Dallas,” but with way more booze. Fans were predictably divided as to whether or not it worked.

The original #WillAndGrace ended with them not speaking for 18 years after Grace refused to raise her baby with him. This reboot is a lie. pic.twitter.com/gFdv4pTjJ2

Grace had a pregnancy. An entire season dedicated to it. Then she had the baby. So the writers decided that was all a dream? #WillAndGrace https://t.co/PkJGl3eJoo

But plenty loved it:

can we do this to BATTLESTAR GALACTICA's finale too https://t.co/Rxw8U35Kzg

And if you want to actually see that massive retcon for yourselves, here you go.

Here's how #WillAndGrace explained away its controversial 2006 "series finale" pic.twitter.com/gVWfHH65NS

Meanwhile, not just society, but television has changed dramatically since “Will and Grace” went off the air in 2006. So it was that the writers made the most of a newfound freedom to more overtly talk about politics in a period when same-sex marriage is the law of the land, but Donald Trump is president.

Also Read: How 'Will & Grace' Had a Real-Life Political Impact on Marriage Equality

The episode had a lot of jokes about the current era — and at the expense of the current occupants of the White House. And fans largely loved it. Not least of all because of the episode’s final, “F-you Trump” scene:

That anguished scream you just heard in D.C. was Mike Pence seeing the end of #WillAndGrace. The cackling and whooping was everyone else.

#WillAndGrace is never allowed to go away again. This is the best mic drop of all time. ???? pic.twitter.com/I2ckDFukMj

YES I AM HERE FOR MAKE AMERICA GAY AGAIN #WillAndGrace

Can't wait to see Trump's 6am tweet rant about how the amazing #WillAndGrace was "bigly bad.. worst ratings..tremendously bad" ????????????

It wasn’t just the ending, however. Fans for the most part loved the politics running through the entire episode.

#WillAndGrace is exactly what @alysemayequade and I (and America?) needed after 9 brutal months

I'm fine w/ the political commentary on #WillAndGrace but I haaaate the cheeto jokes. There's SO much to attack w/o reference to appearance.

Will Truman saying "Michelle Obama" is my safe word. #WillandGrace

To be fair, not everyone loved the show’s overtly liberal return. Some were afraid it might bog the show down…

That was a very heavy-handed episode of #WillAndGrace, but I think it may have been their attempt to get it out of their system. We'll see.

While others clearly just disagree entirely.

#WillAndGrace ends with Make America Gay Again hat. Its so woke and resist and bling and swag. This wont get old week after week.

But there were other fans here to remind people that the show, simply because of its premise, was always political:

#WillAndGrace was critical to changing hearts, minds & culture. @HRC is honored to be a part of its come back.

VP Biden's full answer when we had him on MTP in 2012 re his support for same-sex marriage & key role of #WillAndGrace in educating people pic.twitter.com/gZxjtjyDgy

Please stop trying to act like #WillAndGrace was “never political.” LGBT rights are political. The show ALWAYS made a political statement.

You can’t tune in to laugh at LGBT characters but not want to see that #politics affects their lives #WillAndGrace https://t.co/xPt8fmR9BD

We need a #WillandGrace for immigration, proving that for every undocumented person, there's the US citizen friend, co-worker, classmate

Also that kiss! I'm old enough to remember when #WillAndGrace had the first gay kiss on primetime TV. It was a big deal!

Moral is, the world has changed immensely in a short time and #WillAndGrace changed so much and wow here we are again life is insane.

The jokes are new, but the show still feels exactly the same as it did fifteen years ago and my heart is so happy. #WillAndGrace pic.twitter.com/AlacwHmfCh

But lest we forget the most important thing about the passage of time:

If this were real life, Jack McFarland would now most DEFINITELY be a bear.#WillandGrace