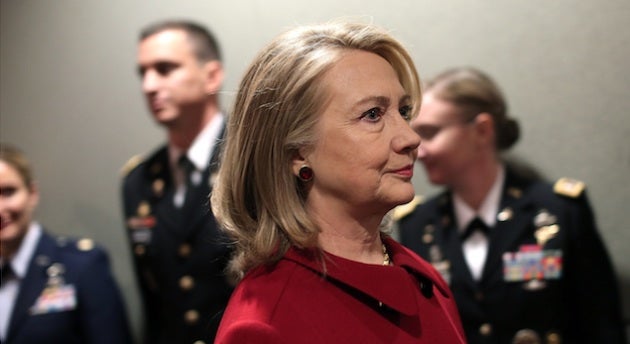 The next presidential election is more than three years away, but if the media and entertainment industry is to be believed, Hillary Clinton's next stop will be the Oval Office.

The former Secretary of State has been non-committal about her White House ambitions, but even as she ducks the question, a growing number of movies, books and television projects is fueling speculation that she will mount a second bid for the presidency.

Experts say this level of scrutiny is unheard for a political figure who hasn't even formally declared her candidacy yet. With apologies to Marco Rubio and Chris Christie, Hillary Clinton is a stratosphere beyond the other members of the presidential hopeful club.

"This isn’t just your average senator," Donna Bojarsky, a political consultant who advises members of the entertainment industry, observed. "This is one of the star political families in American history. She makes politics relatable to the average person because she has a fascinating and tellable story." And Hollywood is scrambling to share the story of the former First Lady turned Senator, then Secretary of State and possible Commander in Chief.

Among the Hillary-centric projects on tap are a four-hour NBC miniseries starring Diane Lane as the former First Lady; a feature-length CNN Films documentary about the presumptive Democratic presidential front-runner from "Inside Job's" Charles Ferguson; and "Rodham," a biopic directed by "The Spectacular Now's" James Ponsoldt that focuses on her early years with Bill Clinton when they were just starting out as a power couple.

Also read: Hillary Clinton Biopic Director on Her Tough Romantic Choices and the Pressure to Get 'Rodham' Right

To chronicle the movements and machinations of the lady herself, the New York Times has taken the unusual step of assigning ace reporter Amy Chozick to cover the Clinton beat while both she and her husband remain private citizens.

"I don't want to Sunday morning quarterback a Saturday morning decision, but it probably is unprecedented," Thomas Edsall a former political reporter at the Washington Post and a professor at Columbia University's School of Journalism, said of the Times' move. "Normally the only politician who would be assigned a full-time reporter at this stage would be an incumbent president."

Clinton herself will wade into the fray with next year's publication of a memoir that examines her years at the State Department and covers topics like her response to the Arab Spring.

Also read: 6 Actresses Who Should Play Hillary Clinton in 'Rodham'

And all of this doesn't take into account the litany projects that seem to have been at least partly inspired by Clinton's glass-ceiling shattering stints. It is unlikely that "Political Animals," a USA miniseries about a former first lady who finds herself in a rival's cabinet after losing her own bid for the White House, wasn't heavily inspired by Clinton's own tumultuous relationship with President Barack Obama.

On the comedic side of the aisle, "Veep" presents a more jaundiced look at a female politician who finds her political ambitions stymied, which sounds awfully familiar.

Hollywood's fascination with the couple dates even further; "Primary Colors," a thinly veiled roman a clef about Bill Clinton's 1992 presidential campaign, appeared in multiplexes 15 years ago. Current Hillary Clinton projects have inspired intense attention from the moment they became public.

"When it was announced I was going to direct it, it was like craziness," Ponsoldt told TheWrap. "I’ll never  know what it’s like to be a famous actor, to not have any privacy, to have people care about tiny things. But the bit that I can glean from this, from the scrutiny that it received from the industry, the political blogs, left-leaning and right-leaning, I thought, wow, this has  no bearing on reality. None whatsoever."

It's not clear that all of this Clinton-mania will translate into votes, although experts told TheWrap that after more than two decades national politics, the public is very familiar with both the good and the bad sides of the Clintons.

"I doubt any of these things are going to break any new ground, so I don’t think it’s detrimental," Jennifer Duffy, senior editor for the Cook Political Report, told TheWrap. "It will keep her fans interested and her detractors with something new to write about or talk about or tweet about."

Duffy said that the panoply of Clinton films and shows also help keep her in the news, which could be important given that for the first time in 12 years, she does not have any political office.

Plus, there's certainly an aura of invincibility surrounding Clinton in Democratic circles with top party officials such as Minority Leader Nancy Pelosi and former Obama advisor David Axelrod publicly stating that she is the strongest candidate or likely nominee. As a sign of the support she commands even at this early stage, a pro-Clinton super PAC said Tuesday that it raised $1 million in June.

Given this level of support, analysts are laying their bets on a presidential run.

"It would be so unusual for someone to have this high a favorability rating within their party and then chose not to run," Edsall said. "If I were to bet money on it, I'd be betting a lot that she's going to be in the race."

Of course there's the risk that she will simply peak too early. After the movie premieres are over, the political tell-alls hit store shelves, and the television programs air, there's still an awful lot of time between now and election day 2016.

"There's an old saying by a British Parliamentarian that a week is a long time in politics and a year is forever," Sean Gibbons, a former CNN producer and the vice president for communications at the political think tank Third Way, said. "It's fair to assume the world may not look the same way tomorrow as it does today, and that could change everything."