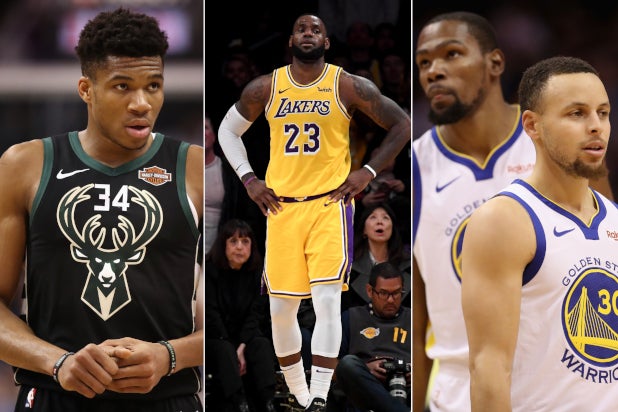 The NBA playoffs kick off this weekend, but there is one notable absence: LeBron James.

For the first time since 2005, the league’s most recognizable player will be sitting at home when the postseason tips off, ending a disastrous first season with the Los Angeles Lakers. But how much will that impact the Nielsen ratings for ESPN/ABC and Turner?

“Not having him in the playoffs? Obviously that is going to hurt,” Reggie Miller, an analyst for TNT, said during a press call earlier this week. But he adds that the Golden State Warriors going for a three-peat — and four in the past five years — is one of many still-compelling storylines this postseason.

“What’s fun now is seeing who wants to take the mantle LeBron has created,” fellow TNT analyst Chris Webber added. “The Playoffs overall are going to be so exciting and competitive that the casual fan will have to come [and watch] because the avid fan is going to be telling him or her, ‘Look, this is a great series.'”

James’ move to the west coast had an impact during the regular season. Up until this season, James had played exclusively in the Eastern Conference, meaning that the majority of his games would kick off the national doubleheaders and thus give a boost to the later game. He also missed a month with a groin injury, and when he came back, the team struggled.

TNT saw its ratings dip 12% this season for its 66 games, down to 1.5 million, and that included five Lakers games that did not feature James. This was also the first time in years that TNT’s opening night doubleheader did not feature a James-led team, which sank that night’s viewership this season by 42%, creating a hole it had to dig out of all season.

ESPN fared better with its 101 games on ESPN and ABC, averaging 1.99 million viewers to draw even with last year.

Also Read: Within Co-Founder Chris Milk on the Biggest Challenges of Augmented and Virtual Reality Storytelling

However, a look into the Nielsen ratings history shows that a “LeBron effect” is a real thing.

James’ absence from the Eastern conference — which his teams have won each of the past eight seasons — creates room for other stars, such as the Milwaukee Bucks’ Giannis Antetokounmpo and Philadelphia 76ers’ Joel Embiid and Ben Simmons. ESPN’s Burke Magnus, the network’s executive vice president, programming and scheduling, noted that the Bucks and Toronto Raptors “performed above viewership expectations” during the regular season.

Whether ESPN/ABC and Turner will grab satisfactory ratings without the draw of LeBron James is also in the “maybe” column for the time being.