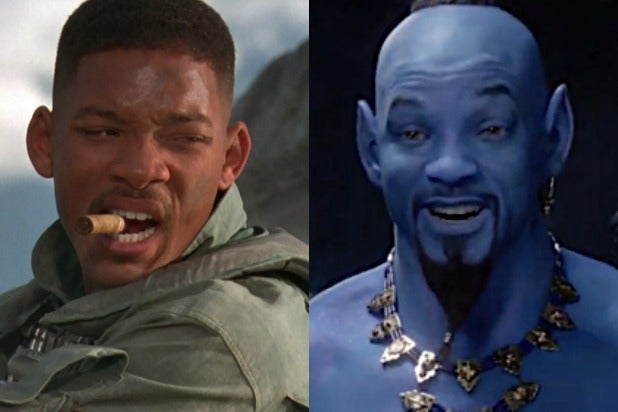 For 23 years, “Independence Day” stood as the biggest box office hit of Will Smith’s career. A magic lamp just brought an end to that.

This past week, Disney’s remake of “Aladdin,” which stars Smith as the iconic Genie, passed the $817 million worldwide box office total that “Independence Day” earned in 1996. After six weekends in theaters, “Aladdin” now has a worldwide total of $874 million, standing only behind “Avengers: Endgame” and “Captain Marvel” on the 2019 charts.

In a video message on Instagram, Smith said he was “humbled and honored” by the news and that he was grateful to still be getting such big roles at age 50.

Aladdin just became the biggest movie of my career! I’m honored and I’m Speechless. (You see what I did there?Gotta pay attention) The only thing I can say is… Thank You

For Smith, it’s a big milestone to clear. Situated in his career between “Bad Boys” and “Men in Black,”  “Independence Day” was a key film that turned him from the star of “Fresh Prince of Bel Air” into one of the biggest box office moneymakers of the late 90s. But at the same time, “Aladdin” isn’t the only recent blockbuster success Smith has enjoyed. In 2016, “Suicide Squad” came close to passing “Independence Day” with $746 million grossed worldwide, giving Smith two of his three highest grossing films within the last three years.

Smith will return to theaters this fall with Ang Lee’s potential awards contender “Gemini Man,” a film which will see him play both an aging hitman and a younger clone of himself sent to finish him off. Co-written by “Game of Thrones” showrunner David Benioff, “Gemini Man” will be released by Paramount on Oct. 11.