It looks like any hard feelings between the Fresh Prince and his original Aunt Viv have been quashed. After 23 years, Will Smith and actress Janet Hubert have sat down for what looks like a real friendly chat as part of the upcoming “The Fresh Prince of Bel-Air” reunion special, due later this year on HBO Max.

Smith revealed the reunion with Hubert on Instagram in a post commemorating the 30th anniversary of the day “Fresh Prince” debuted on NBC. “We’re doin’ something for y’all… a for real Banks Family Reunion is comin’ soon to @HBOmax!” Smith wrote in a message attached to a couple of photos. Smith also included a tribute to his deceased costar James Avery, who played Uncle Phil. Avery died at age 68 in 2013.

In the first, Smith and the rest of the show’s surviving main cast — Alfonso Ribeiro, Tatyana Ali, Karyn Parsons, Joseph Marcell, Daphne Maxwell Reid, and DJ Jazzy Jeff — gathered for a group photo in a recreation of the show’s iconic living room set. And the second showed Smith talking alone to Hubert, both smiling and, we hope, apparently putting their differences behind them.

Check out that photo above, and the full cast photo below. 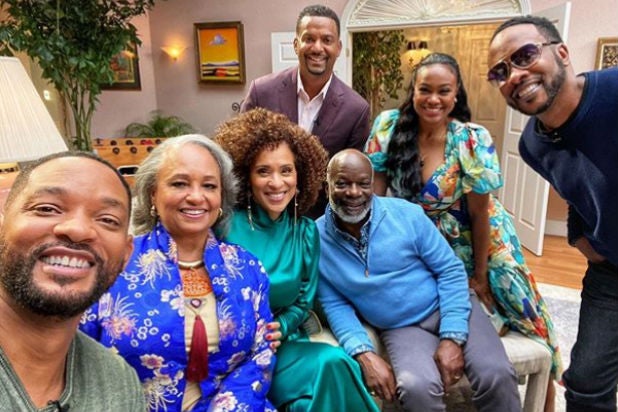 As fans of the show know, Hubert played the original Aunt Vivian during the show’s first three seasons. She was fired before season four and replaced by Reid for reasons that are still not fully understood — explanations range from creative differences, to contract disputes, to claims that she was fired because she got pregnant. And for his part, Smith was vocal about problems he and Hubert had working together.

After her departure, she maintained a decidedly negative opinion of her former co-stars. Most famously in 2016, when she criticized Smith and his wife Jada Pinkett Smith for boycotting the Oscars to protest the lack of diversity, and the next year when she called out Ribeiro after he posted a photo with the rest of the main cast.

But, while in the feud’s early days Smith criticized her, in 2016 he had nothing but nice things to say about Hubert, calling her “a brilliant artist” who “brought a really powerful dignity to the show.” Maybe that helped pave the groundwork for their (possible) reconciliation. Whatever the reason, we’re glad to see it.

“The Fresh Prince of Bel-Air” is currently filming and is expected to stream around Thanksgiving.