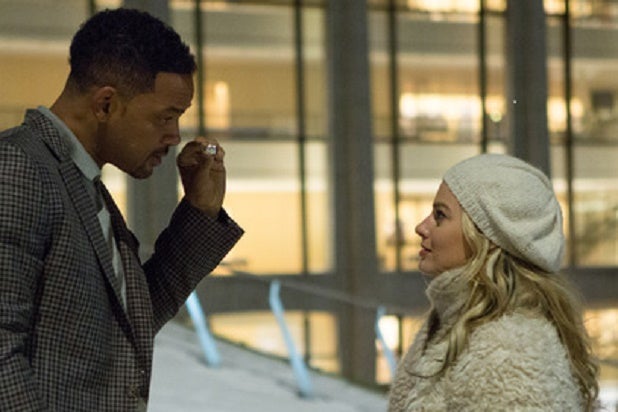 “Focus,” the con man comedy that marked Will Smith’s first big-screen starring role in two years, opened to $19.1 million and first place at the box office this weekend.

The R-rated tale of two grifters co-starring Margot Robbie didn’t knock moviegoers’ socks off and came in a little under analysts’ projections and distributor Warner Bros.’ hopes. The weekend’s other wide opener, the low-budget horror film “The Lazarus Effect,” came in just under expectations as well with an estimated $10.6 million.

But “Focus” ended the two-week reign of the steamy and record-breaking “Fifty Shades of Grey,” and it wasn’t a bomb like Smith’s last film, the pricey 2012 sci-fi space saga “After Earth,” For now, that probably feels pretty good for the 46-year-old Smith, who hasn’t had a breakout domestic box-office hit since “Hancock” in 2008.

Part of his challenge now is that Smith set the box-office bar so high. Between 2005 and 2008 he had four live-action, non-sequel movies in a row that topped $160 million domestically – “Hitch, “The Pursuit of Happyness,” “I Am Legend” and “Hancock.”

“Focus,” the first R-rated film Smith has starred in since “Bad Boys II” in 2003, might have done better on a weekend other than the one following the Oscars. The overall box office was down from the same weekend last year by more than 20 percent, and lousy weather in the South and Midwest didn’t help. But moviegoers may have been simply catching their breath after a sizzling January driven by “American Sniper,” a record Presidents Day weekend debut by “Fifty Shades” and last Sunday’s Academy Awards.

Even Fox Searchlight’s Best Picture Oscar winner “Birdman” didn’t make much of a splash, taking in $2 million from 1,213 theaters and missing the top ten. In fairness, the post-awards run for the quirky comedy directed by another Alejandro Inarritu and starring Michael Keaton amounted to a victory lap, since “Birdman” has already had two wide runs and has been available on DVD and for streaming since Feb.17.

Smith isn’t the only one getting a little older. Eighty-eight percent of the audience for “Focus” was over the age of 25. The crowd, which was 53 percent women, gave it a “B” CinemaScore, in line with the critics, who had it at 56 percent positive on Rotten Tomatoes.

“The younger the audience got, the higher grade it received,” said Warner Bros. executive vice-president of distribution Jeff Goldstein, pointing to the “A-” grade that “Focus” drew from those under 25. “Without the weather, we’re maybe two or three million up, so we’re happy with this.”

It would be unfair to see “Focus” as a negative reflection on Smith’s drawing power, according to Rentrak senior analyst Paul Dergarabedian.

“This was an original film — not a franchise, not a superhero movie, not a young adult movie — and aimed at an older audience who typically do not rush out to see a movie in the same way as their younger counterparts. He is still one of the most bankable movie stars working today and this adds yet another No. 1 debut to his box-office track record,” he said.

The overseas performance of “Focus” will provide another indicator of where Smith, once a major force at the foreign box office, stands today. And it will have a lot to do with the profitability of the $55 million caper tale directed by Glenn Ficarra and John Requa (“Crazy, Stupid, Love”).

The bottom line was not an issue for “The Lazarus Effect,” produced for $5 million by Blumhouse Productions and Mosaic Films and acquired by distributor Relativity Studios for $3.3 million. But the reviews for the chiller starring Olivia Wilde and Mark Duplass might have been.

Critics have the PG-rated “Lazarus Effect,” directed by David Gelb, at a bleak 11 percent positive. The audience – 52 percent female and 60 percent under 25 – gave it a “C-“ CinemaScore. That’s low but par for the course, since horror fans are notoriously tough graders.

“Kingsman: The Secret Service” finished second with $11.7 million for Twentieth Century Fox. The Colin Firth spy spoof is up to $85.7 million domestically and more than $185 million globally after three weeks.

“The SpongeBob Movie: Sponge Out of Water” beat out “Fifty Shades” for third place. The animated tale from Paramount Pictures brought in $11.2 million in its fourth week and lifted its domestic total to $140 million.

“Fifty Shades” wasn’t far behind in fourth, taking in $10.9 million in its third week. That ups its domestic total to $147 million, but the real story for the R-rated romance starring Jamie Dornan and Dakota Johnson is overseas.

It added $36 million from abroad and ranks as the top movie globally for the third weekend in a row. “Fifty Shades” has brought in $338 million internationally and will cross the $500 million mark at the worldwide box office this week.