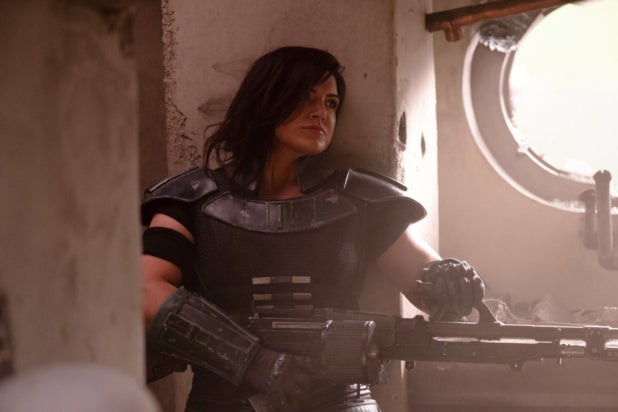 “The Mandalorian” is a huge hit for Disney+, so it should come as no surprise that during Disney’s investor call on Thursday the company announced not one but two TV series spinoffs — “Ahsoka” and “Star Wars: Rangers of the New Republic” — that take place around the same time and will also lead up to an as-yet unrevealed crossover event.

Of the two, “Ahsoka” is the most obvious and easy to figure out. That show is going to focus on Aksoka Tano, the disillusioned ex-Jedi who featured large in the animated shows “The Clone Wars” and “Star Wars: Rebels” and was played by Rosario Dawson when she made her live action debut during Mando’s second season.

“Rangers of the New Republic” though is basically a blank slate. Never mind who it will star, we don’t even know who or what the Rangers even are. But one thing everyone has been pretty sure about is that the new series is pretty likely to feature the character of Cara Dune, played during Seasons 1 and 2 of “The Mandalorian” by Gina Carano — which isn’t sitting well with quite a lot of fans. (We’ll explain why momentarily.)

When we met Dune in Season 1, she was a former Rebel Alliance and New Republic special forces soldier who went AWOL after the Empire was defeated because she couldn’t really adjust well to civilian life. After several years on the lam working as a mercenary, she and Mando team up for a couple of adventures and part on good terms. When we catch up with her in Season 2, she’s settled down on a remote colony world and has smoothed things over with the New Republic, and now is an officially commissioned as a marshal.

Anyway, there have been rumors for months that a “Mandalorian” spinoff would focus on Cara Dune. But the thing is, Carano has spent much of 2020 sharing some particularly obnoxious political opinions on social media — including what looked a lot like support for baseless conspiracy theories and lies about nonexistent voter fraud in states that went for Joe Biden on Nov. 5, just two days after the election.

And only 9 days after that she invited people to join her on Parler, the social media platform preferred by right wing extremists. And shortly after that shared another baseless conspiracy theory against Democrats and mask-wearing. With that, many fans pretty much turned on her for reasons we probably don’t need to explain.

Perhaps as a result, Carano didn’t really say much else about politics for the rest of November and the uproar died down a little bit. But then two days ago, again while people still assumed that an announcement of a Cara Dune show was inevitable, she waded back into it with a tweet that used the topic of a COVID-19 vaccine to suggest mail-in voting cannot be trusted. Which predictably sparked an all-new backlash.

Disney and Lucasfilm have yet to make any kind of public comment, but you can rest assured the uproar over those comments has not died down. So it is that, in the middle of that, for whatever reason, Disney announced a show that, title-alone, I  seems geared for Cara Dune, but didn’t actually announce she’s in it.

We can only speculate, and it could all be a coincidence. Perhaps Disney is saving casting announcements for another day. We don’t really know one way or the other. But it sure feels at least like “Rangers of the New Republic” should include someone like Cara Dune, which makes the fact that she wasn’t announced while Ahsoka was feel weird. Guess we’ll all find out next Christmas.