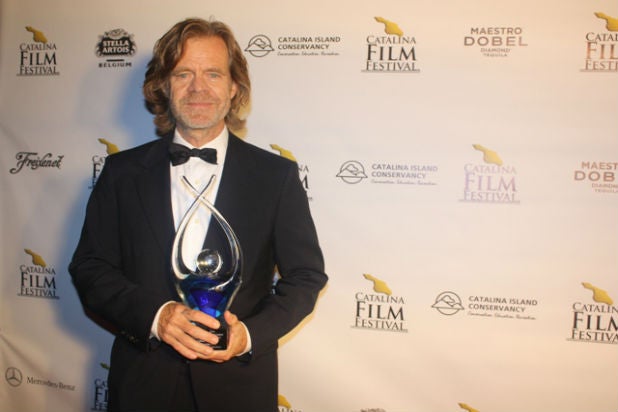 “Step Brothers” John C. Riley and Will Ferrell would be proud of the wine mixer at this year’s Catalina Film Festival.

Catalina Island has a film festival, you ask? Yes, yes it does. The storied island joined the festival circuit four years ago. And unlike other film festivals, no ski jackets are required at this seaside film fete.

Filmmakers Roman Coppola, Andy Garcia, and William H. Macy along with actors Emmy Rossum, Jason Ritter, Jordin Sparks and more made their way to the Catalina Film Festival to be honored and celebrated for their work and contributions to film.
The meticulously executed star-studded event kicked off with the premier of the film “Left Behind” with Nicolas Cage. The film is based on the book by Jerry B. Jenkins who was also in attendance. Film director Vic Armstrong (“The Adventures of Young Indiana Jones: Adventures in the Secret Service”), and cast members Cassie Thompson (“Switched at Birth”), Nicky Whelan (“Workaholics”), and Jordin Sparks (“Sparkle”), were also on the red carpet.

Cage was also honored that evening as the recipient of the Charlie Chaplin Icon Award, but filming in Toronto limited him to accept his trophy via video.

The evening’s events included a Chaplin Centennial Tribute with the screening of the 1914 silent film, “Kid Auto Races at Venice.” Tramp, Chaplin’s iconic character, makes his very first appearance in this six-minute reel.

The five-day festival closed with Macy’s compelling directorial debut, “Rudderless,” which was also the closing film at this year’s Sundance Film Festival.

Macy was on hand to accept the Stanley Kramer (“It’s a Mad, Mad, Mad, World”) Social Artist Award, only the second actor to have this honor bestowed by Mrs. Kramer at this festival, “For bringing issues that matter to the forefront.”

“Let’s make sure we’re not part of the problem,” said Macy, “in the way we know best — the way that’s been the hallmark almost from the beginning: by telling the truth. It makes a better story,” he concluded. His speech was met by applause from about 900 festival goers nearly filling the 1,187 seat Avalon Casino and Theater.

Garcia was this year’s recipient of the Ronald Reagan Great Communicator Award. Garcia’s film career was highlighted with clips of his iconic roles in films like “The Untouchables” and “The Godfather III.”

The Cuban-born actor was visibly humbled by the honor and reflected on his own path to this moment.

“Because of the opportunity that this country gave to me, and the sacrifices my family made in order for me to have the freedom to be able to stand in front of you, and speak freely without any repercussions, and to pursue my dreams, is what seems to me Ronald Reagan stood for, and it’s what this country stands for,” he told the audience.

Coppola attended the festival with his wife and daughter to accept the Vanguard Award. Being able to forge his own path in the wake of the Coppola family legacy in the filmmaking world is a significant accomplishment, noted the festival director.

Coppola’s multiple skills include visual effects, director, screenwriter and producer. He’s best known for his work on Bram Stoker’s “Dracula,” and his collaborations with Wes Anderson on “The Darjeeling Limited” and “Moonrise Kingdom,” among others.

Rossum sauntered on to the red carpet noticeably excited to be honored with the Avalon Award which is given to an actor for “making waves in uncharted waters.” Rossum’s work in the recent film “You’re Not You,” in which she plays the caretaker of an ALS afflicted woman played by Hilary Swank, represents the spirit of this award.

“I’m sure you’ve all heard about the ALS Ice Bucket Challenge this summer. I even participated in it. But there’s still a lot of information people need to know about ALS,” Rossum shared.

“We don’t get a lot of no’s at all,” said Ron Truppa, Founder and Executive Director of the Catalina Film Festival , when asked about the festival’s attendance record.

“When we ask filmmakers and celebrities if they’d like to come out to Catalina Island for the day or a weekend they say, ‘absolutely!'” Truppa added.

Getting to Catalina isn’t an uncomplicated journey. However, if the 90-minute ferry ride is too long, then getting to the island via helicopter is an option.

A tweet posted by William H. Macy reveals he took advantage of the chopper ride across the Pacific Ocean to attend the festival.

Jacquie and me on our way to the Catalina Film Festival where they’ll show RUDDERLESS. And I get an award. pic.twitter.com/NMySXfjT8F

Whether you choose to go by plane, boat or helicopter, the trip is well worth it. And as Truppa noted, “it’s easier to get to than Sundance.”

Still not convinced about going to Catalina for a first-rate film festival? Consider there’s a legitimate film industry wine mixer at the festival, too.