Me, too. Not that I wouldn’t relish a reason to visit relatives, but Portland is much more accessible if you live in Oregon, and not that long a journey from Los Angeles. 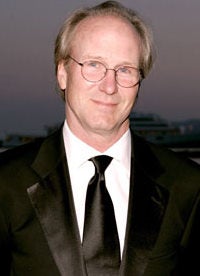 William Hurt, a yeoman actor of extraordinary talent (even in less-than-stellar films) has always sizzled in celluloid, so the anticipation of seeing him in the flesh quickens the heart. OK, my heart. And taking a swat at the role Ralph Richardson burned on film (with Katharine Hepburn) sounds pretty good to me.

Yes, we all know far too much about his personal relationships, but this guy knows how to nail a performance, exuding a sexy, irresistibly intelligent-by-design mien on screen.

“Altered States” remains one of my favorite movies, even if Hurt does eat a goat and spend too much time in a sensory deprivation tank. Credit must be paid to this actor’s actor who has the transformative talent to completely disappear into a role. Without drowning.

And I hated the movie “The Big Chill” because it was a ripoff of the brilliant John Sayles 1980 indie classic "The Return of the Secaucus Seven," but Hurt managed to entice me anyway.

There’s just something about that guy: Even when he plays snarky, you can’t take your eyes off him.

Jeff Bridges, George Clooney, William Hurt — all manly men. Not that there’s anything wrong with Zac Efron and his ilk. Efron was fantastic in “17 Again,” but let’s face it, he’s this generation’s David Cassidy: pretty in a Davy Jones kind of way, safe and cozy.

Actors of Hurt’s caliber are rare indeed. Maybe Matt and Brad, but not Johnny.

Portlanders know firsthand that Hurt is a seriously gifted actor: This will be his third appearance at the Artists Repertory Theatre (ART), a lauded, nonprofit gem in one of the most livable cities in the country. (But please don’t move here, plead the locals.) Plus it doesn’t hurt that he’s friends with Allen Nause, ART’s artistic director.

With film credentials so numerous they can make your head spin, it may surprise you to learn about Hurt’s live-performance history and “rehearse-till-you-get-it-right” philosophy.

Scratch the surface of any of his movie characters and you’ll notice a simmering thespian awaiting his cues. This is evidenced by all his screen roles, even the unsympathetic and creepy ones.

He’s had a love affair with the stage from the beginning of his acting career, when he made his stage debut at the Oregon Shakespeare Festival almost 30 years ago.

Apparently he doesn’t want to let that muscle memory fade. That explains why he’ll be wallowing in O’Neill’s classic dysfunctional-family tale from Aug. 13-19 at ART, after a run in Sydney.

But if you can’t make it, you won’t have to wait long to see Hurt on screen. This guy’s been busy with a handful of films recently released or in production: “The Yellow Handkerchief” with Kristen Stewart (it’s 2 years old, pre-“Twilight” craze), “Robin Hood,” “The River Why,” “Shadows,” “Beast of Bataan” and “Late Bloomers” (with Isabella Rossellini), which is now filming.

If you make it to Portland, bring plenty of tissues.