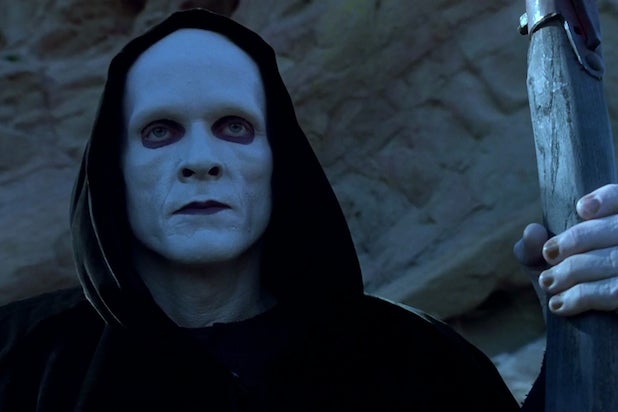 The long-awaited third film in the “Bill & Ted” series is taking shape, as William Sadler, the actor who played the Grim Reaper in “Bill & Ted’s Bogus Journey,” is reprising his role in the sequel.

The official Twitter feed for the film announced the news in a tweet Monday following many fan questions, confirming that Sadler’s version of Death will appear in “Bill & Ted Face the Music.”

Sadler joins Keanu Reeves and Alex Winter in the reunion film that follows the events of “Bill & Ted’s Bogus Journey,” in which the now middle-aged Bill and Ted set out on a new adventure to fulfill their destiny as the band Wyld Stallions to bring harmony to the universe through the power of their music. Along the way, they will be helped by their families, old friends and a few music legends.

In “Bogus Journey,” Bill and Ted were confronted by the Grim Reaper after they wound up dead and are forced to challenge him to games like Battleship, Clue and Twister in order to win their journey back from the afterlife.

“Face the Music” will begin production this summer, and the film will be released by Orion Pictures on Aug. 21, 2020 through the United Artists Releasing banner.

Dean Parisot (“Galaxy Quest,” “Red 2,” “Fun With Dick and Jane”) is directing the time-traveling buddy comedy based on a screenplay by Chris Matheson and Ed Solomon, who are returning to the franchise.

Sadler is known for roles in “The Shawshank Redemption,” “Die Hard 2” and “Iron Man 3.” He most recently provided voice work on the animated series “Our Cartoon President” and appeared in an episode of “Law and Order: Special Victims Unit.” He’ll also be seen in the horror remake “Grudge.”