Willow and Jaden Smith are continuing their grand tradition of meandering magazine profiles and high-concept fashion shoots — this time touching on topics ranging from a planned early retirement to the Black Lives Matter movement.

The children of national treasure Will Smith and Jada Pinkett Smith are cover stars for the September issue of Interview magazine, both looking considerably more grown up (and so much alike in their steely, appealing androgyny).

And though they’re clearly coming of age — Jaden is 18, Willow will be 16 in October — their interview with “The Voice” judge and prolific producer Pharrell Williams yielded another mix of earnest discussion of sensitive issues and the tone-deafness many associate with privileged kids. 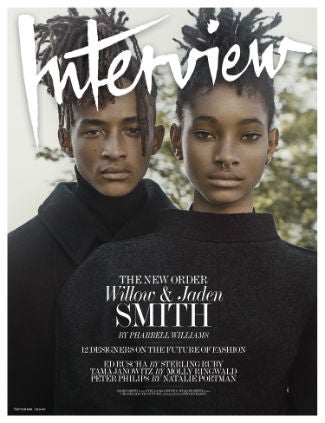 Here are some notable revelations from Jaden and Willow’s Interview profile:

1. In a conversation about good books, Willow touches on Black Lives Matter.

When Pharrell asked the brother-sister duo about their recommended reading, Willow said Anita Diamant’s “The Red Tent” had struck a deep chord with her, especially for current parallels to tensions between the black community and police forces across the country.

“That book really made me cry. It put me in the place of gratitude for my sisters and mothers that have come before me, because it’s rough out here. Like, racism … People are dying at the moment because of unconscious cops,” she said. “I just had to take a moment to grieve for the world. But sexism is also a huge problem in society. And that book really opened my eyes to a whole other world of insanity and humanity.”

Diamant’s 1997 novel is about a group of women forced to “take refuge” while menstruating or giving birth, and the bonding experiences they have in isolation. Willow also recommended Hanya Yanagihara’s 2015 novel “A Little Life,” which was a critical and commercial hit. Willow told Pharrell, however, “It’s not important.”

2. They love “Buffy The Vampire Slayer.”

In a much breezier portion toward the end of their interview, Willow and Jaden revealed an affection for Joss Whedon‘s pop culture TV franchise “Buffy The Vampire Slayer,” starring Sarah Michelle Gellar as a blond killer of the undead.

“I will forever be following that TV show until the day that I die. I love Buffy,” Willow said. Jaden repeated her sentiments.

“Buffy” did have a character named Willow, played by Alyson Hannigan, who is currently shooting TV Land’s small-screen adaptation of “The First Wives Club.”

3. They were very competitive toddlers.

When Pharrell asked Jaden if he’s ever been competitive with his younger sister, he demurred, noting, “Willow’s always been better than me at everything.”

Willow denied this but Jaden continued: “Willow started making music first. I was like, ‘My younger sister is, like, 4, and she’s making all these fire songs. What’s happening?’ Willow was doing all these things, about to have record label deals at like the age of 6, and I was like, ‘I feel like I’m underachieving.'”

4. They don’t understand you either, old people.

Part of the Willow-Jaden allure seems to be the way they manifest a post-millennial belief system without gendered dress codes and other conventional boundaries. Or, simply put, they totally confuse their elders. And the feeling is mutual.

“It seems like they don’t understand our thought process,” Willow told Pharell of adults. “Or, like, things have happened in the past that they’re still mad about. We want to accept them and move forward. I mean, I can definitely see things that have happened in the past that they’re holding on to and things that are happening right now that bog them down, but this generation wants to transcend them.”

When Pharrell asked Jaden where he sees himself in 10 years, the 18-year-old simply responded: “Gone.”

Willow chimed in to say she could “see myself in the mountains somewhere in a tent cooking a squirrel. Yeah, bro! I want to retreat back to living off the land and just being in nature, experiencing life in the most pure, natural way possible.”

After what we imagine is a shake of his abstract up ‘do, Jaden simply added, “Agreed.”

Jaden Smith is 18 today. Here’s a look at his dynamic life so far