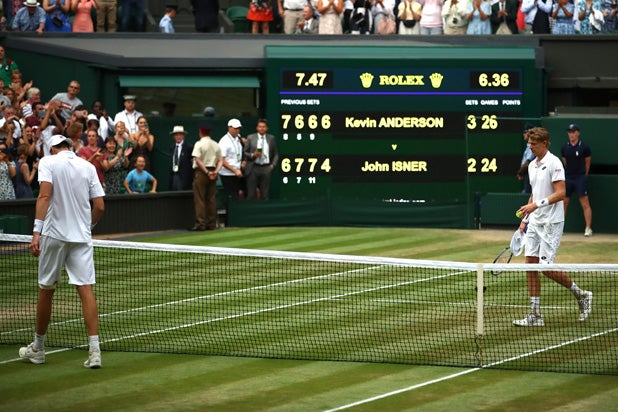 Wimbledon announced a new policy for its 2019 tournament to prevent marathon matches such as this year’s epic six-hour-plus semifinal duel between John Isner and Kevin Anderson.

There will now be a final-set tie-break that will only kick in when the score reaches 12-12, the All England Lawn Tennis Club said in a statement on its website Friday.

The decision comes in the wake of Isner and Anderson’s seemingly never-ending six-hour-36-minute match last June. Isner also holds the record for the longest professional tennis match in history when he defeated Nicolas Mahut in a total of 11 hours and 5 minutes of play over the course of three days at the 2010 Wimbledon.

The club said it decided on the new tie-break rule after a “thorough review of match data from the past 20 Championships, and upon consultation with players and officials.” It will apply to all events, including Qualifying, Gentlemen’s, Ladies,’ Mixed and Junior singles and doubles.

Along with a flurry of complaints from players, coaches and fans that matches were being allowed to go on too long, scheduling issues also played a part in enacting change.

This year’s women’s final between Serena Williams and Angelique Kerber was delayed by more than two hours because the second men’s semifinal between Novak Djokovic and Rafael Nadal had to finish first.

“While we know the instances of matches extending deep into the final set are rare, we feel that a tie-break at 12-12 strikes an equitable balance between allowing players ample opportunity to complete the match to advantage, while also providing certainty that the match will reach a conclusion in an acceptable time frame,” said AELTC chairman Philip Brook.

After the announcement, Isner appeared to use a WWE GIF to express his opinion on Twitter while tagging @Wimbledon.

U.K. player and six-times doubles grand slam champion Jamie Murray said at the U.S. Open that he was a big supporter of introducing a tie-break rule, according to the Guardian.

“I think tennis is long enough. By 6-6 in the fifth set … the players have played enough tennis, the fans have seen enough tennis, TV’s seen enough of that match, a tie-break is enough, so it doesn’t get out of control and mess up schedules, mess up players’ next rounds, mess up draws and things like that,” he said.