"Winter’s Bone," a dreary backwoods noir about a grief-stricken teenager looking for her missing father, and "Restrepo," a brutal, action-packed documentary about young soldiers in Afghanistan, won the top prizes at the Sundance Film Festival’s awards ceremony on Saturday night.

"Winter’s Bone" won the Grand Jury prize for U.S. dramatic film. Director Debra Granik, who also accepted the screenwriting award earlier in the evening, unloaded a long list of collaborators before adding, "On this budget level, I really can’t thank everybody." 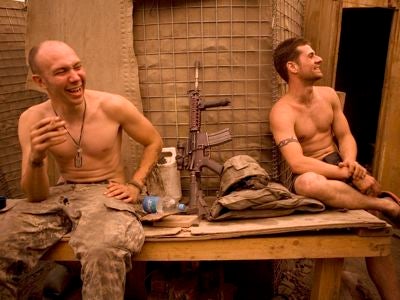 Of the two big winners, only "Winter’s Bone" has yet to secure theatrical distribution, through Roadside Attractions. "Restrepo," which screened at the festival on opening night, remains on the market.

"This country is at a very painful moment," Junger said in his acceptance speech. "We would like it if our movie could help this country go forward."

The ceremony was hosted by David Hyde Pierce, whose entrance began with a crowd-pleasing rap song that contained lyrics referencing most of the movies in the program. Festival director John Cooper joined Pierce onstage to throw in a few lyrics, all of which were written by Sundance programmer David Courier.

"Animal Kingdom," the Australian gangster film starring Guy Pearce that follows the decline of a family in the 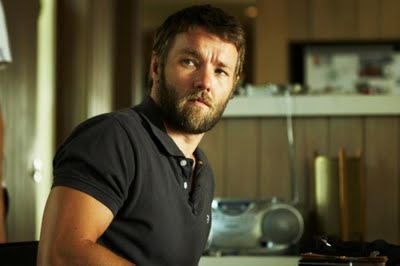 Audience awards went to "happythankyoumoreplease" for U.S. dramatic film, and "Waiting for Superman" for U.S. documentary.

Editor’s note: This version is corrected from an early version that did not specify that Grand Jury wins for "Animal Kingdom" and "The Red Chapel" were in the World Cinema category.

Here’s the complete release from Sundance:

Peers Give Homewrecker Best of NEXT Award

Park City, UT-The Jury, Audience, NEXT, and other special award-winners of the 2010 Sundance Film Festival were announced tonight at the Festival’s Awards Ceremony hosted by David Hyde Pierce (star of The Perfect Host which premiered in this year’s Park City at Midnight section) in Park City, Utah. Highlights from the Awards Ceremony can be seen on the Festival website, www.sundance.org/festival.

Jury Prizes in Shorts Filmmaking were awarded to American and international short-form films on Tuesday, January 26. Other awards recognized at the ceremony included the Sundance / NHK International Filmmakers Award, created to honor and support emerging filmmakers with their next screenplays, and the Alfred P. Sloan Prize, awarded to a film which excels in addressing compelling topics in science or technology.

"Great films make for a great festival," said John Cooper, Director of the Sundance Film Festival. "This year it was as if I could feel a shift in the DNA of the film community – the reaction to the films was inspiring."

"These awards celebrate the diversity of this year’s program," said Trevor Groth, the Festival’s Director of Programming. "Hopefully the attention these prizes bring will allow the films to connect with a wider audience hungry for choice."

The Grand Jury Prize: Documentary was presented to Restrepo, directed by Sebastian Junger and Tim Hetherington. Sebastian Junger and Tim Hetherington’s year dug in with the Second Platoon in one of Afghanistan’s most strategically crucial valleys reveals extraordinary insight into the surreal combination of back breaking labor, deadly firefights, and camaraderie as the soldiers painfully push back the Taliban.

The Grand Jury Prize: Dramatic was presented to Winter’s Bone, directed by Debra Granik; written by Debra Granik and Anne Rosellini. An unflinching Ozark Mountain girl hacks through dangerous social terrain as she hunts down her missing father while trying to keep her family intact.

The World Cinema Jury Prize: Documentary was presented to The Red Chapel (Det Røde Kapel)directed by Mads Brügger. A journalist with no scruples, a self-proclaimed spastic, and a comedian travel to North Korea under the guise of a cultural exchange visit to challenge one of the world’s most notorious regimes. Denmark

The World Cinema Jury Prize: Dramatic was presented to Animal Kingdom, written and directed by David Michôd. After the death of his mother, a seventeen year-old boy is thrust precariously between an explosive criminal family and a detective who thinks he can save him. Australia

The Audience Award: Documentary was presented to WAITING FOR SUPERMAN, directed by Davis Guggenheim, for his examination of the crisis of public education in the United States through multiple interlocking stories.

The Audience Award: Dramatic was presented to happythankyoumoreplease, written and directed by Josh Radnor, about six New Yorkers juggling love, friendship, and the keenly challenging specter of adulthood.

The World Cinema Audience Award: Dramatic was presented to Contracorriente (Undertow) written and directed by Javier Fuentes-Leõn, an unusual ghost story set on the Peruvian seaside in which a married fisherman struggles to reconcile his devotion to his male lover within his town’s rigid traditions. Peru / Colombia / France / Germany

New for 2010: Best of NEXT. Selected by ballots cast by the eight NEXT filmmakers, this award celebrates a film creating the greatest art on a low budget. The Best of NEXT award is presented by YouTube™.

The Directing Award: Documentary was presented to Smash His Camera, directed by Leon Gast, about famous celebrity photographer and original paparazzo, Ron Galella.

The Directing Award: Dramatic was presented to 3 Backyards, directed and written by Eric Mendelsohn. The film is about a trio of brief, life-altering adventures unfolding in a seemingly normal autumn day.

The World Cinema Directing Award: Documentary was presented to Space Tourists, directed by Christian Frei who explores the impact of space tourism in the heavens and on earth. Switzerland

The World Cinema Directing Award: Dramatic was presented to Southern District, directed and written by Juan Carlos Valdivia, about a bourgeois family in La Paz, Bolivia who watches as social change begins to penetrate their insulated world. Bolivia

The Waldo Salt Screenwriting Award was presented to Winter’s Bone, directed by Debra Granik; written by Debra Granik and Anne Rosellini. An unflinching Ozark Mountain girl hacks through dangerous social terrain as she hunts down her missing father while trying to keep her family intact.

The World Cinema Screenwriting Award was presented to Southern District, written and directed by Juan Carlos Valdivia, about a bourgeois family in La Paz, Bolivia who watches as social change begins to penetrate their insulated world. Bolivia

The World Cinema Documentary Editing Award was presented to A Film Unfinished, written and directed by Yael Hersonski. Edited by Joëlle Alexis. The film is a powerful documentary about Nazi-produced propaganda films.Germany / Israel.

The Excellence in Cinematography Awards honor exceptional cinematography in both dramatic and documentary categories:

The Excellence in Cinematography Award: Documentary was presented to The Oath, directed by Laura Poitras. Cinematographers: Kirsten Johnson and Laura Poitras. The interlocking drama of two brothers-in-law whose associations with al Qaeda in the 1990s propelled them on divergent courses.

The Excellence in Cinematography Award: Dramatic was presented to Obselidia,written and directed by Diane Bell. Cinematographer: Zak Mulligan. In his quest to document nearly extinct occupations, a man unexpectedly finds romance.

The World Cinema Cinematography Award: Documentary was presented to His & Hers, directed by Ken Wardrop. Cinematographers: Kate McCullough and Michael Lavelle. A 90-year-old love story through the collective voice of 70 days at different stages of their lives. Ireland

The World Cinema Cinematography Award: Dramatic was presented to The Man Next Door (El Hombre de al Lado). Directors and cinematographers Mariano Cohn and Gastón Duprat. A small incident over two neighbors’ common wall sparks a conflict which affects the intimacy of the view over the chimney; the protagonist sparks a conflict and with paranoiac obsession destroys everyday life. Argentina

A World Cinema Special Jury Prize: Dramatic for Breakout Performance was presented to Tatiana Maslany for her role as a starry-eyed teenager in Grown Up Movie Star. Canada

A World Cinema Special Jury Prize: Documentary was presented to Enemies of the People, directed by Rob Lemkin and Thet Sambath, for their watershed account of Cambodian history and a quest for closure on one of the world’s darkest episodes. Cambodia / United Kingdom

A Special Jury Prize: Documentary was presented to GASLAND, directed by Josh Fox. With spirit, strength, and a sense of humor, Fox’s personal documentary takes a look at how natural gas affects our air and drinking water.

A Special Jury Prize: Dramatic was presented to Sympathy for Delicious, directed by Mark Ruffalo; written by and starring Christopher Thornton about a recently paralyzed DJ who seeks out the dubious world of faith healing.

Obselidia, written and directed by Diane Bell, is the recipient of this year’s Alfred P. Sloan Prize. The Prize, which carries a $20,000 cash award by the Alfred P. Sloan Foundation, is presented to an outstanding feature film focusing on science or technology as a theme, or depicting a scientist, engineer, or mathematician as a major character.

Sundance Institute and NHK (Japan Broadcasting Corporation) on Thursday announced the winners of the Sundance / NHK International Filmmakers Awards honoring and supporting emerging filmmakers-one each from the United States, Japan, Europe, and Latin America. The winning filmmakers and projects are: Amat Escalante, Heli from Mexico; Andrey Zvyagintsev, Elenafrom Russia; Daisuke Yamaoka, The Wonderful Lives at Asahigaoka (written with Yugo Eto) from Japan; and Benh Zeitlin, Beasts of the Southern Wild (written with Lucy Alibar) from the United States.