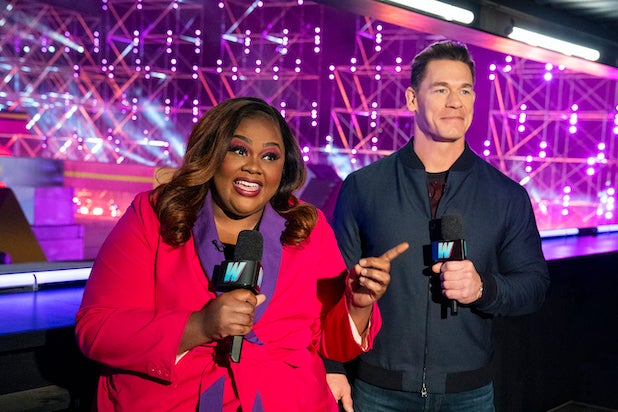 A lot of you could — and did — see John Cena last night. And Nicole Byer, too, as the duo hosts the rebooted “Wipeout,” which officially launched Thursday on TBS. We say “officially,” because the series premiere did technically air as a sneak peek two days earlier.

Thursday’s 9 p.m. premiere drew 1.1 million total viewers, according to Nielsen, with 432,000 of them coming from the key adults 18-49 demographic. That demo tally makes this “Wipeout” the No. 1 new unscripted offering on cable television, beating fellow freshman TBS series “The Go Big Show,” which opened to 302,000 viewers in the key demo.

The Tuesday sneak peek earned 775,000 total viewers, with 369,000 of them from the main demo. You may be wondering why what was technically the first airing of Episode 1 didn’t outdo the official premiere. While Tuesday’s special preview had a great lead-in — the UCLA vs. Michigan post-game show — the “Wipeout” episode didn’t premiere until 12:49 a.m. So, technically Wednesday morning in the eastern time zone.

“We’re extremely proud to add to our growing slate of unscripted can’t miss television. After hitting it out of the park earlier this year with ‘Go-Big Show,’ Corie and her team have another home run in ‘Wipeout,'” Brett Weitz, general manager of TBS, TNT and truTV said in a statement. “It’s clear these franchises connect with our audience and on the TBS promise to always provide big, bold, and edgy fun. Our partner, EndemolShine, re-imagined this beloved series with new twists, unbelievable athleticism and more than a few great wipeouts.”

“Corie” is Corie Henson, the head of unscripted development and TNT, TBS, truTV.

“‘Wipeout’ is exactly the show we all need right now,” Henson added. “John, Nicole and Camille are the perfect ring masters of this big ball circus. I’m so grateful to all of the producers and crew that pulled off this amazing and challenging production.”

The “Camille” there refers to Camille Kostek, who is the field host on this version.

The new “Wipeout,” which will get 20 hours as a freshman show, will feature new format twists and elements that will push the athleticism and willpower of each contestant pairing to even greater extremes, all while delivering more than a few epic fails, according to TBS’ logline. Each game has been designed into three rounds and now features a jaw-dropping, three-stage, obstacle course consisting of multiple strategies and decision points designed to test the stamina of the competitors. The series’ iconic big balls also make a return, bringing many laughs and surprises along the way for fans.

(Editor’s note: An earlier version of this story utilized a Nielsen data stream that did not include out-of-home viewing. The story was updated when those numbers became available.)