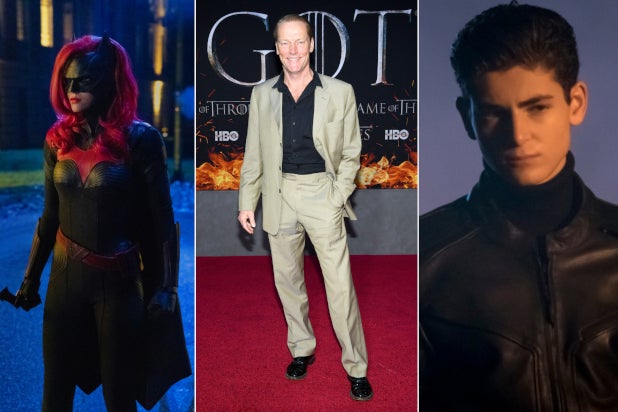 On Thursday, Fox’s Batman prequel “Gotham” will finally get to unveil their version of the Caped Crusader, which represents an anomaly for shows based on DC Comics characters: Actually getting access to the Batman.

But there is a catch: “Gotham” had to wait until its final episode. But it’s still closer than any other DC Comics series has gotten to Batman, though a few shows are figuring out a workaround.

The CW’s latest series as part of its expanding “Arrowverse” is likely to be “Batwoman,” which is part of its current group of pilots and considered a near-lock to get picked up to series. The project allows the network to finally incorporate Gotham City and much of Batman’s world, even if it can’t use Batman himself. So the creative team leaned into that aspect: What is Gotham City without the Dark Knight?

“It’s a post-Batman Gotham City,” Sarah Schechter, an executive producer for the series, told TheWrap. “What is it like after these heroes leave?”

When Ruby Rose made her debut as the character, along with Gotham City, during the CW’s “Elseworlds” crossover event in December, it featured the first mention of any kind that Batman does in fact exist. Or, more specifically, he did exist. It’s just that he left Gotham City about three years ago. That question serves as the jumping off point for Kate Kane aka Batwoman’s story.

“What’s great about the restriction of just focusing on Batwoman is that we have to build a world for our character,” Schechter added. “Part of not using the crutch of Batman is making sure we’re establishing this really complicated world for her to live in. It’s a reflection of her in a lot of ways.”

Even getting Gotham City was a herculean effort. “Arrow” showrunner Beth Schwartz told reporters in December that for years they had tried to weave in at least a reference to Gotham City, but outside of a brief Bruce Wayne namedrop, DC and Warner Bros. rebuffed them at every turn. “We tried, so many times,” she said. Caroline Dries, who is spearheading the solo “Batwoman” project, said that, although Warner Bros. has opened up its vault, Batman is “the one where they cut you off.”

While “Gotham” featured a Bruce Wayne before he became Batman, “Titans” is going the other way. Last week, the DC Universe series, which has already added major characters like Superboy and Deathstroke for season 2, added Batman himself… kind of.

“Game of Thrones” actor Iain Glenn to play an older Bruce Wayne, one after he’s no longer wearing the cape and cowl. Here’s how DC Universe described the character:

After decades of fighting crime as Batman, billionaire Bruce Wayne is just as driven to protect Gotham from evil as he was in his prime. Needing to reconcile his relationship with Dick Grayson, the duo hope to forge a new dynamic as Bruce tries to help his former sidekick and the Titans achieve success.

Batman is arguably DC Comics most lucrative character, having already toplined two separate film franchises — Warner Bros. has just begun the search for another big-screen Batman for Matt Reeves’ planned trilogy of films. Although DC Comics has been dumping out its toy chest lately, Batman still leaves a glaring hole as big as Wayne Manor, which is not likely to get filled anytime soon.