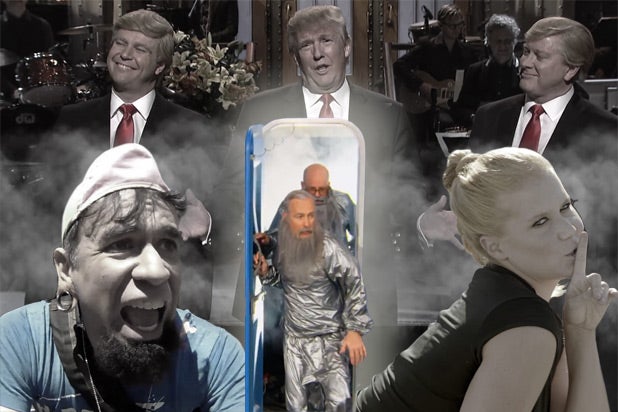 Netflix is dipping its toe into original sketch comedy on Friday when “W/ Bob and David” drops an entire — albeit short — season. The debut comes just six days after Donald Trump led “Saturday Night Live” to its most-watched telecast since 2013. It’s been a big week for small-screen skits.

But those series are about as different as two shows within the same genre can be, at least from a delivery perspective. In its 41st season, NBC’s “Saturday Night Live” is a true American institution, whereas the streaming Netflix reunion series consists of four half-hour episodes, plus a special.

Pre-launch, the latter is already earning rave reviews, which is particularly impressive considering Bob Odenkirk and David Cross‘s last sketch TV series, “Mr. Show,” went off the air in 1998. That’s 17 years ago, but light years away from where we are in today’s media landscape. Trump’s weekend plans earned major eyeballs, but fewer applause.

With much sketch comedy migrating to — or existing solely on — the Internet, the health and future of the format on TV differs a bit depending on who you ask. Both Comedy Central Original Programming President Kent Alterman and IFC President Jen Caserta told TheWrap they believe it can be quite bright, though the two are preparing for somewhat different versions.

Caserta pointed to the Emmys adding a sketch category as proof of her opinion that we are in the genre’s “heyday” on television, despite what millennials might tell you. Alterman, whose “Inside Amy Schumer” took home that Emmy, is not as convinced that viewers won’t be heading more and more to smaller screens.

“It’s challenging for sketch on linear TV, because we live in an era now where viewers can easily and reasonably feel like, ‘Oh, well I don’t have to watch that show on TV. I can just see the best sketches on digital platforms,'” Alterman told us.

“When a given sketch breaks through in a big way, it is because of these multiplatform opportunities that allow explosive growth,” he added. “What started as tens of millions of hits would turn into hundreds of millions.”

While Caserta enjoys the “shareable … snackable” idea of sketches on the web, she prefers the classic half-hour TV option, which allows for additional context, running jokes and themes, and recurring characters. Few shows utilize those elements as well as her network’s “Portlandia.”

Obviously, both execs have skin in . Alterman’s Comedy Central has made stronger use of monetizing the web, so he doesn’t really care where you watch. That’s why the Viacom channel isn’t too publicly upset over diminishing traditional TV ratings, which we found out when discussing Trevor Noah’s “Daily Show” metrics with Alterman’s boss, Comedy Central President Michele Ganeless.

There’s one definite thing that Alterman and Caserta see eye-to-eye on: the importance of a singular, guiding talent these days. Sketch is all about finding a “really strong, smart point of view — and a unique voice,” Alterman explained, emphasizing that as a concept unchanged over time. But one way to do that points to the trend Caserta called “more emphasis on the multi-hyphenate,” a strategy that veers away from an ensemble, and assigns more responsibility to one or two leads.

Not only does that option keep the sense of humor consistent, it provides far more budgetary flexibility. That’s important to compete in 2015, when as Alterman put it, “you can create a sketch show with your iPhone now.”

Of course, “That’s not to say that a troupe isn’t going to come along and knock our socks off,” Caserta said, “I just think it’s getting harder for them.”

“Sketch gives creator-performers a lot of room that they wouldn’t get in another format to express themselves in different directions,” Alterman said. “One sketch could be 45 seconds and another sketch could be 6 minutes within the same show. There’s just a whole different set of constraints in say a scripted narrative show.”

It also allows shows like Alterman’s “Inside Amy Schumer” to bounce from straight sketch to stand-up to (wo)man-on-the-street interviews — and more, showing off multiple talents.

Sketch performers relish the opportunity. While she’s sticking with it because of its historical comedic importance, Caserta is landing major stars on her network by promising talent that their pet projects won’t be noted to death.

In many ways, the disruptive technology of the Internet has been either good or great for sketch comedy — Alterman estimated “Key & Peele” skits have topped 1.3 billion views overall — but it also clutters the space.

“We live in a world now where there’s nothing prohibiting anyone really — who has some kind of wherewithal — to go out and produce sketches and put them online,” Alterman said. After all, that’s where he discovered both “Workaholics” and “Broad City.”

Netflix, of course, is the biggest player in subscription digital video. Will it and sketch comedy be a match made in Heaven? We may never know, considering how tight a lid Netflix keeps on its viewership numbers, but whether future investments in the genre are forthcoming will eventually become a clear indicator.