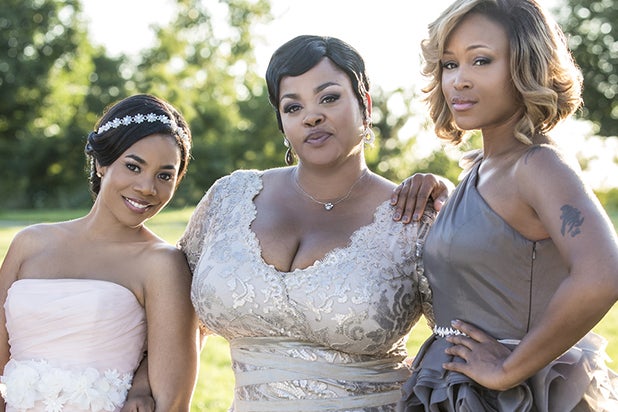 After breakout roles in the “Scary Movie,” “Think Like a Man” and “The Best Man” franchises, Regina Hall is stepping into her first lead role in the Lifetime original movie “With This Ring.”

The romantic comedy centers on three single friends who vow to find Mr. Right within a year, after attending their best friend’s wedding without dates. It co-stars Grammy Award winners Jill Scott (“Get on Up” ), rapper-turned-actress Eve Jeffers Cooper (“Whip It”), Brooklyn Sudano (“Reed Between the Lines”), Jason George (“Grey’s Anatomy”) and Stephen Bishop (“Being Mary Jane”).

Based on the bestselling book, “The Vow” by Angela Burt-Murray, Mitzi Miller and former New York Daily News reporter Denene Miller, the movie explores the ups and downs in the hunt for love.

Between their careers, bad decisions and baby-daddy drama, the odds seem stacked against the ladies. But Hall, who plays talent agent Trista, says that’s part of the movie’s charm. “When I read the script, what I took from it was that it didn’t end with a message where it all worked out,” she said.

Hall’s “Think Like a Man” co-star Gabrielle Union optioned the rights to the book five years ago and executive produced the movie with Tracey Edmonds. TheWrap spoke with Hall about “With This Ring,” its message on marriage and the advice it has for women who can’t seem to find “the one.”

TheWrap: This movie has a lot of say about relationships and marriage. What message should we take away from it?
: The biggest message was we’re all going through things. We all want love. Everyone wants to love and be loved. But there’s a really important point about self love and realizing that being married does not define a happy life … It’s important for women to enjoy their life, exactly where it is, without fear.

What I also loved about it was the importance of friendship. I loved how the women all supported each other. They all had their own individual lessons, stories and journeys. But I do think that they came to realize that marriage is not the end all be all. It’s an important part of the journey, but you’re not defined as a woman by marriage.

TheWrap: How did you get involved with the project?
Gabrielle [Union] did it the old fashion way. They sent the script to my agent and asked me to read it. I read it, liked it and I said I would love to be a part of it.

TheWrap: Were you familiar with the book “The Vow” before this?
I do remember it when Gabrielle was on the set of the first “Think Like a Man,” and she said, “Oh I’m gonna be coming to you ladies with something.”

TheWrap: What was your experience working with the director, who is kind of a newcomer?
What I loved about Nzingha Stewart is she’s just really gentle, and I love her way of directing. I also love her visually. She has a music video background, so she’s used to telling stories visually with a very small amount of time.

TheWrap: What was your experience working with and Eve?
I didn’t know either of them. Whenever you go into a new city [the movie was shot in Cleveland, Ohio], you’re alone and you’re with people you don’t know. You’re always a little apprehensive because you’re doing a movie about being friends. You’re like “gosh, I hope they like me and I like them because we have to play friends.” But I have to say, I really love those women — and Brooklyn Sudano, who’s also in the movie, who plays our fourth friend.

TheWrap: Lately Lifetime has been making a lot of movies starring black actresses. What are your thoughts on that?
They’re smart. They know they have an audience there with women, and they also know there’s another group of women, ethnic women, who watch the network as well. They’ve been really conscious about making sure that they have material for us and about us.

TheWrap: A long list of women in Hollywood have complained about the lack of roles. Are cable channels like Lifetime the solution?
They are certainly part of the solution. Listen, I love that they make movies for women and stand behind them, by promoting them … It’s getting better, but I also don’t want to say it’s perfect. I know so many talented women who I wish there were more opportunities for them. But television as a whole is trying to be more inclusive.