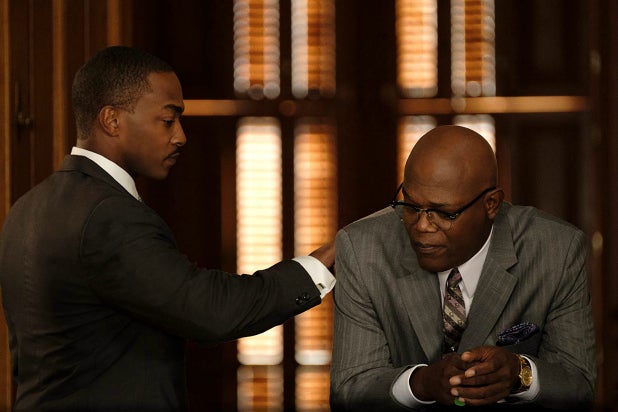 Two wives of Bernard Garrett Sr., the central subject of Apple TV+’s “The Banker,” have come out and asked the company not to release the film.

Linda Garrett and Kathy Ussery Garrett, who were married to Bernard Garrett Sr. (portrayed by Anthony Mackie in the film), are not involved or depicted in “The Banker,” but claim the movie is inaccurate and should be shelved.

“The story was stolen and distorted and it has been hurtful to the family. They have manipulated the narrative,” Linda Garrett’s lawyer Todd Burns told The Hollywood Reporter, which first reported the news.

The call for Apple to cancel the release of “The Banker” is just the most recent knock against the film, which was initially set for a December release to give it a shot with Oscar voters. Before the film’s premiere, however, accusations of sexual misconduct were made against Garrett Sr.’s son Bernard Garrett Jr. by his half-sisters. Garrett Jr. also served as a co-producer on the film.

A representative for Apple did not respond to TheWrap’s request for comment.

Also Read: 'The Banker' Cast and Crew Stand by Film and 'Its Positive Message of Empowerment'

“The Banker,” directed by George Nolfi, stars Mackie and Samuel L. Jackson as two black men who, in the 1950s and ’60s, hired a white man to front their real estate business. The film tells the story of one of the first African-American bankers in the U.S. “The Banker” is an important part of Apple’s push into original content, as the tech company looks to solidify itself as a major player in Hollywood.

So far, it’s not going well for the streamer’s film efforts. Apple recently had to say goodbye to Oprah Winfrey, who dropped her support for the documentary “On the Record” featuring accounts from women who have accused music mogul Russell Simmons of rape. Winfrey was supposed to executive produce the film.

Apple postponed the release in order to allow for time for a review of sexual misconduct.

Apple decided earlier this week to release the film in March, having conducted its review, saying that Garrett Jr. would have his credit on the film and would not profit from the film’s release.

“We created Apple TV Plus as a home for stories that matter and believe ‘The Banker,’ inspired by the brave actions of Bernard Garrett Sr. and Joe Morris, two African American businessmen who brought about positive social change, is one of those stories,” an Apple spokesman said at the time. “We wanted to take the time to understand the situation at hand — and after reviewing the information available to us, including documentation of the filmmakers’ research, we’ve decided to make this important and enlightening film available to viewers.”

Linda Garrett told THR she plans to publish an open letter she wrote to Apple and the filmmakers asking them to nix the film’s release. In her six-page letter, Linda Garrett provides a timeline of events, some of which are in the film, and claims to debunk their accuracy, according to THR.

Also Read: Apple to Release 'The Banker' in March After Conclusion of Misconduct Review

“I am alive,” Linda Garrett wrote in her letter, according to THR. “If a tiny bit of interest in the truth existed none of this would have happened. I could have spared the filmmakers millions of dollars — and my daughters years more intentionally inflicted pain — over this recent rape of our identity if anyone had ever tried to find me.”