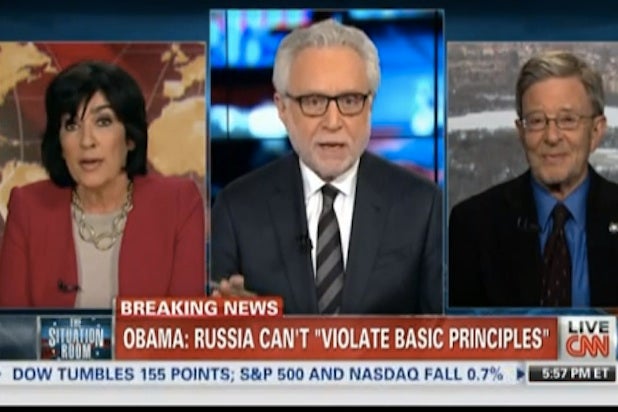 CNN’s Christiane Amanpour and Wolf Blitzer got into a heated on-air sparring match Monday over a controversial quote by the Russian Ambassador to the U.N. Security Council, who called pro-European Ukrainians “anti-Semites and fascists.”

“You know, you have to be really careful by putting that across as a fact!” Amanpour exclaimed.

The normally staid Blitzer fired back at Amanpour, defending his reporting. “That’s what he said!” Blitzer interjected. “That’s what Vitaly Churkin said!”

“That’s the Russian position, but are you telling me, are you saying that the entire pro-European, Ukrainians are anti-Semites?” Amanpour pressed.

“Of course not!” Blitzer shouted back.

“We just as a network have to be really careful not to lump the entire pro-European Ukrainians into what is some may well be, which are nationalistic and extremist,”Amanpour stressed.

“Christiane, we’re not! I’m not! We’re not doing it all,” Blitzer argued.

“Nation” columnist Stephen Cohen attempted to break the tension with a joke.

Watch the spirited back-and-forth below: