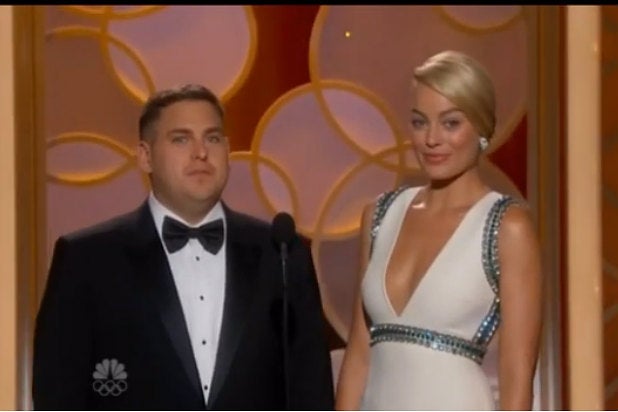 “The Wolf of Wall Street” co-stars Jonah Hill and Margot Robbie survived a nearly embarassing moment Sunday evening when the teleprompter they were reading off displayed the wrong text.

Hill and Robbie took the stage to introduce Best Motion Picture, Comedy or Musical nominee “Wolf of Wall Street” when they found themselves staring at teleprompter text meant for Aaron Eckhart and Paula Patton, who later handed out the award for Best Actor in a TV Series, Drama.

Robbie is a newcomer to awards shows but she ably rolled with the punches and let Jonah Hill navigate the oral obstacle. Eventually, someone offscreen handed the presenters a piece of yellow paper (“Wolf of Wall Street” flashback!) with the correct text.

Bay should take note of Hill’s grace under pressure, having walked off stage last week at CES after a teleprompter moved too quickly for the “Transformers” director. The clip went viral on social media and prompted an explanation from Bay on his blog.

“Wolf of Wall Street” is competing against “American Hustle,” “Her,” “Inside Llewyn Davis” and “Nebraska” for the top award at the Golden Globes.