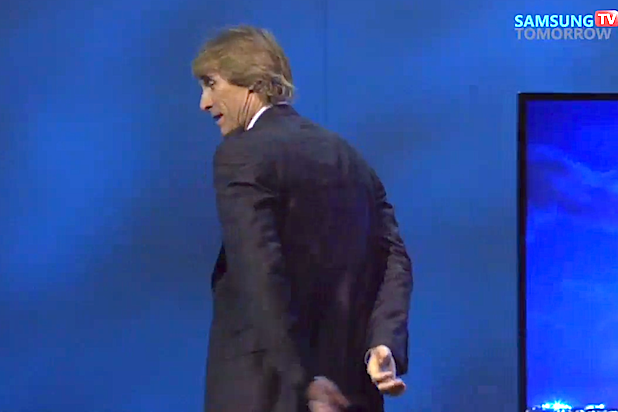 Michael Bay can handle acting divas and attackers wielding air conditioners — but ask him to ad-lib in front of a large audience and you’ll see another side of the “Transformers” director.

Bay awkwardly walked offstage in the middle of Samsung’s press conference at the Consumer Electronics Show on Monday after a teleprompter stopped working. Bay was supposed to talk about a Samsung UHD TV, and how that video quality would improve the experience of watching his movies.

Bay began discussing his creative process when something clearly went wrong with his teleprompter — prompting his onstage companion to say they would wing it. Bay agreed, then continued to explain what motivates him as a director … for a couple of seconds.

When asked about how the TV could impact the way people watch his movies, Bay said “Excuse me, I’m sorry” and walked offstage.

Later in the day, Bay posted the following statement to his website:

Wow! I just embarrassed myself at CES – I was about to speak for Samsung for this awesome Curved 105-inch UHD TV. I rarely lend my name to any products, but this one is just stellar. I got so excited to talk, that I skipped over the Exec VP’s intro line and then the teleprompter got lost. Then the prompter went up and down – then I walked off. I guess live shows aren’t my thing.
But I’m doing a special curved screen experience with Samsung and Transformers 4 footage that will be traveling around the world.
Michael

Here’s a video of Bay’s bizarre departure (timed to the beginning of his speech):