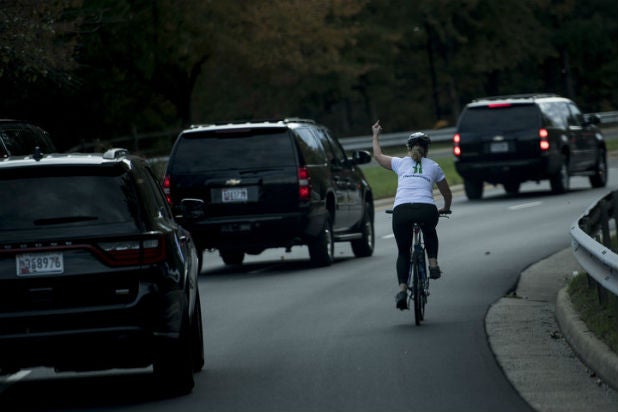 The woman who lost her job last fall after she was photographed flipping off Donald Trump’s motorcade is now suing her former employer for wrongful termination and breach of contract.

In papers filed Wednesday in the Fairfax County, Virginia Circuit Court, lawyers representing Juli Briskman said that Akima LLC fired Briskman not for her conduct, but because the government contractor “feared retaliation by the president or his administration.”

Last October, Briskman was photographed on her bicycle giving Trump the bird as his motorcade left a Virginia golf course. The photo was widely celebrated on social media and became the subject of news stories and late-night monologues soon after.

Also Read: Seth Meyers Suspects Trump 'Wants to F-- the Border' Between the US and Mexico (Video)

Briskman’s identity is not visible in the photo, but after it went viral, she outed herself on Facebook, adding the photo to her profile, and later informed her supervisors. Briskman says Akima then pressured her to resign, citing a social media policy that, among other things, forbids “obscene malicious or threatening content.” She says she was also told that the photo “jeopardized the Akima brand.”

However, Briskman’s lawsuit asserts that the company did not equally apply this policy. The suit says that as part of her job, Briskman monitored social media activity by other Akima employees. At one point, she says she notified her supervisors that an unnamed senior director had called someone “a f—— libtard a–hole” on Facebook during a political discussion.

That person, the suit says, identified himself as a “long-term” employee of the defendant on Facebook. However, “this employee was not terminated for his obscene speech.” By contrast, the suit says Briskman’s “Facebook and Twitter accounts, at the time of her forced resignation, did not identify her in any way as an employee.”

The suit says Akima forced her to resign because it believed the photo “would have an adverse effect on its ability to obtain government contracts,” and that this violated Briskman’s free speech rights under both Virginia law and the U.S. constitution.

Also Read: Dwayne Johnson Says He Would 'Have Knelt or Raised My Fist in Solidarity' in NFL Anthem Protests

Briskman is seeking $2,692 for legal fees, unpaid severance, and prejudgment interest. She is being represented by The Geller Law Group, PLLC.

Akima, LLC did not immediately respond to a request for comment from TheWrap.