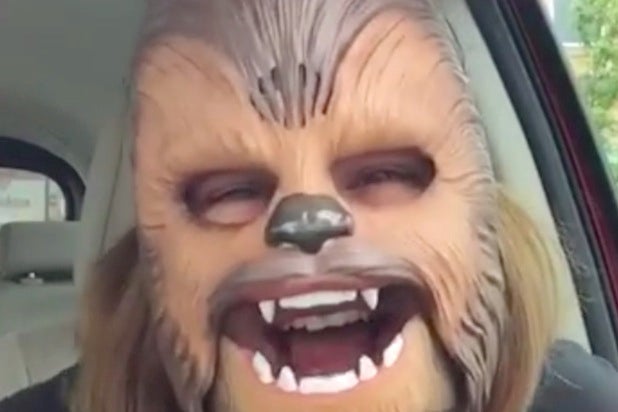 Candace Payne, a hardcore “Star Wars” fan from Texas, decided to treat herself to a little “birthday joy” with a new toy and show it off with a stream on Facebook Live. The resulting video is proof that “Star Wars” can make giddy kids out of pretty much anyone.

“I’d like to say I bought this for my son,” she said while wearing a Death Star shirt. “But at the end of the day, it’s mine and I’m gonna keep it for my own.”

After a few agonizing moments of fumbling and unboxing, she unveils her new treasure: an electronic Chewbacca mask. She slides it on and opens her mouth, causing the mask to let out an electronic Wookiee cry. Cue the most hysterical laugh you’ll hear all week.

The video is now the most watched post on Facebook Live with over 40 million views. Don’t worry about Payne’s kids, though. She promises she will let them play with the mask and partake in the ceaseless joys of movie tie-in merchandise.

It’s fitting that a Chewbacca vid went viral on May 19. That’s also the birthday of Peter Mayhew, who has played Chewbacca in five “Star Wars” films over the past four decades.