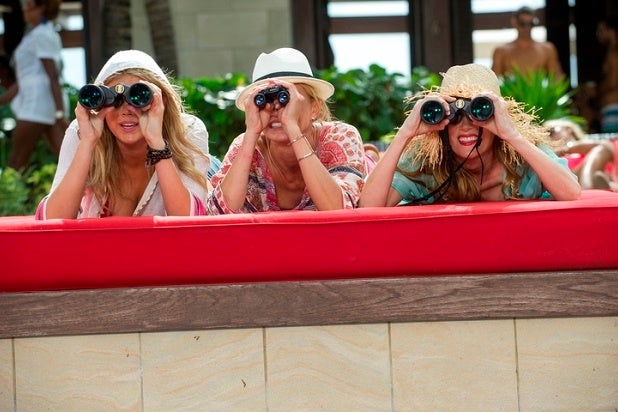 Fox’s PG-13-rated comedy “The Other Woman” was running off with the weekend box-office race, after a strong $9.3 million Friday put it on course for a $25 million first weekend at the box office.

That’s better than expected — the analysts projected around $18 million for the three days — and will be enough to easily end the three-week run at No. 1 of “Captain America: The Winter Soldier.” Disney’s Marvel superhero sequel was in a tight battle for second with Sony’s “Heaven Is for Real,” with both projected to take in around $15 million over the three days.

“The Other Woman” is the first comedy or female-skewing movie in the marketplace for weeks, and that seemed to be helping. The “B+” CinemaScore from first-night moviegoers is good news for Fox, because the reviews haven’t been good (24 positive on Rotten Tomatoes), and word of mouth will be a factor over the next few weeks.

Relativity Media’s action film “Brick Mansions,” starring the late Paul Walker, took in $3.6 million on its first day Friday and is looking at $9.5 million weekend, in line with expectations. It received a “B+” CinemaScore from audiences and was running fifth, behind Fox’s animated musical “Rio 2,” which was on course for a $13.6 million third weekend.

The weekend’s other wide opener, Lionsgate’s low-budget horror film “The Quiet Ones,” managed just $1.5 million Friday and may not hit $4 million. It received a “C+” CinemaScore and was running sixth.

It did manage to beat Johnny Depp‘s sci-fi thriller “Transcendence,” which brought in $1.2 million Friday — off a whopping 74 percent from last week — and was on its way to a very soft $4 million second week. That comes on the heels of last weekend’s disastrous $10.8 million debut, which extended the actor’s box-office losing streak and was a major loss for producer Alcon Entertainment.