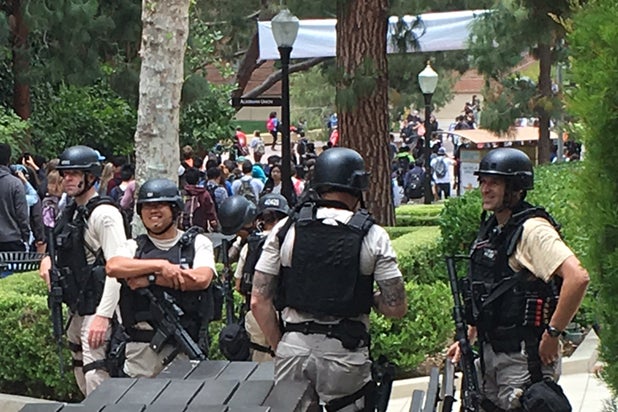 UPDATED at 8 p.m PT: Officials in Hennepin County, Minneapolis, said Thursday that victim Ashley Hasti and Mainak Sarkar were married on June 14, 2011, but it is unclear if they were still married at the time of their deaths.

A woman believed to be UCLA shooter Mainak Sarkar’s ex-girlfriend has been found shot dead in Minnesota, and was included on a “kill list” found in Sarkar’s home.

In another update, the LAPD confirmed that Sarkar had two semiautomatic pistols, at least one of which was “legally purchased.”

Ashley Hasti, who can be seen in multiple Facebook photos with Sarkar, is believed to be the gunman’s Minnesota victim but police have not yet confirmed her identity.

A woman who lives near the home in Brooklyn Park, Minnesota, where police are investigating the second death attributed to Sarkar said she was asked specifically about Hasti by investigators, per the Minneapolis Star Tribune.

According to Los Angeles Police Department chief Charlie Beck, the 38-year-old former engineering graduate student kept a “kill list,” which was found after authorities performed a follow-up investigation at his Minnesota home based on a note found at the scene of Wednesday’s campus shooting.

“Professor [William] Klug’s name was on that list, as was another UCLA professor who was all right,” Los Angeles Police Department Charlie Beck said, declining to disclose the second professor’s name.

A spokesperson for the LAPD also stated on Thursday that the shooter was from Minnesota, and that mental illness was “definitely a possibility.” He also claimed that Sarkar drove from Minnesota to Los Angeles a day or so earlier and that, armed with two semiautomatic handguns and substantial ammunition, had the capability to harm many more people.

The UCLA campus was placed on lockdown on Wednesday around 10 a.m. local time after reports of an active shooter emerged.

The exact motive for the shootings has not been confirmed, but a blog post reportedly written by Sarkar in March — which has since been deleted — claimed that Klug had stolen computer code from him and given it to another student.