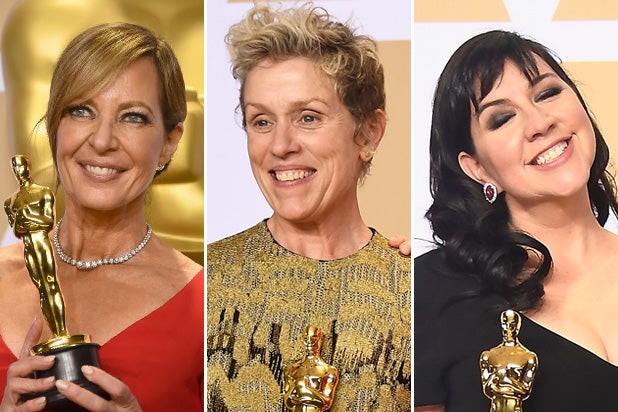 Frances McDormand, the final female Oscar winner of the night, had all the women nominees stand up to be recognized at Sunday’s show — a memorable moment in a show that actually marked the fewest number of female Oscar winners in six years.

The meager figure comes as a stark reminder in the year of #MeToo and TimesUp that the gender gap in Hollywood remains vast.

During Sunday’s show, Lucy Sibbick was the first woman of the night to win a statuette, sharing the prize with two other men, Kazuhiro Tsuji, David Malinowski, for Best Makeup and Hairstyling for their work on theWinston Churchill biopic “Darkest Hour,” starring Gary Oldman.

McDormand finished the night for female winners, earning Best Actress for “Three Billboards Outside Ebbing, Missouri” and preaching “inclusion” in her impassioned speech.

When the nominations were announced in January, the Academy tied its record for female Oscar nominees, but improvement to bridge the gender gap was only slight. Apart from Best Actress and Best Supporting Actress, female nominees didn’t outnumber males in any Oscar categories.

Women still made up less than one-fourth of the total number of Oscar nominees this year.

According to the Academy’s awards librarian, 40 women were nominated in competitive, non-acting categories this year, with an additional 10 nominated in the Best Actress and Best Supporting Actress categories. That ties the record of 50 set two years ago, and is four more than the 46 nominated last year.

But more than 150 men were nominated in acting and non-acting categories, which pushes female representation among the nominees to less than 25 percent.

That’s about the same percentage the Oscars achieved 10 years ago, when there were fewer female nominees (44) but also fewer overall nominees.

In only two categories, Best Costume Design and Best Documentary Short Subject, did Academy voters nominate an equal number of men and women; in no category outside of Best Actress and Best Supporting Actress did the female nominees outnumber the males.

And while Rachel Morrison became the first female nominee in the Best Cinematography category and Greta Gerwig only the fifth woman nominated for Best Director, women were completely shut out in three categories — Best Score, Best Sound Editing and Best Visual Effects — and were in the minority in 14 other categories.

One sign of progress: Where 10 years ago only three women were nominated as producers of Best Picture nominees, this year eight were. But the number of male producers who were nominated grew almost as fast: 12 in 2008, 22 this year.

Of the nine Best Picture nominees, six have both male and female producers, with only “The Post” having more women than men. The other three nominees – “Get Out,” “The Shape of Water” and “Three Billboards Outside Ebbing, Missouri” — do not feature any nominated women producers.

Overall, female membership in the Academy has increased from 25 percent in 2015 to 28 percent after two consecutive years of a record number of new member invitations. Those years have seen a 359 percent increase in invitations extended to women — though until women are put in positions of power that make them eligible for Oscar nominations, Academy voters won’t have the chance to cast ballots for them.

On the other hand, women are the central characters in at least four of the nominees (“Lady Bird,” “The Post,” “The Shape of Water” and “Three Billboards”) and are arguably as central as the male lead in “Phantom Thread” as well.