Marchers are also focused on a few contentious topics, including abortion.  Washington Post reporter Samantha Schmidt captured the back-and-forth between Women’s March protesters and anti-abortion protesters on video from D.C., which you can see below:

Also Read: Maher Says There Are Already Too Many Catholics on the Supreme Court (Video)

Women’s March attendees are also voicing their displeasure with the president and calling on citizens to vote in the upcoming election. The march comes as the Senate moves closer to confirming Coney Barrett as Ruth Bader Ginsburg’s replacement on the Supreme Court’s bench, following Ginsburg’s death last month.

Ginsburg was prominently featured on many signs at the marches, including one in New York City that said, “Vote, and tell ‘em Ruth sent you!” Some protesters in D.C., meanwhile, were decked out in outfits from “The Handmaid’s Tale” while carrying signs that said, “Trump/Pence OUT NOW!”

Masks bearing the phrases “F— Trump” and “Black Lives Matter,” among others, were sported by some protesters. 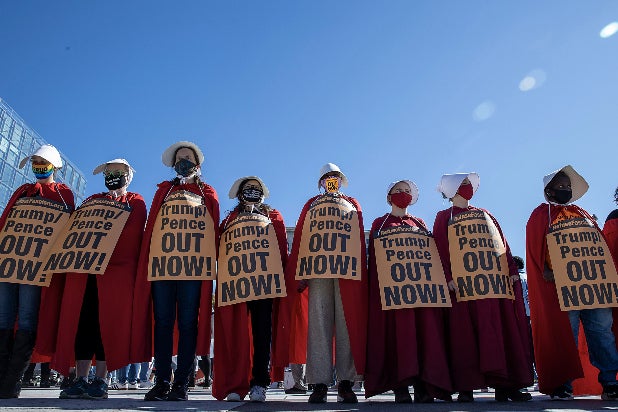 Saturday’s linchpin march in Washington D.C. comes as the city continues to impose stiff measures on residents to prevent the spread of COVID-19. NPR reported the Washington march was permitted to have up to 10,000 attendees.

“Women are going to decide this election,” Rachel O’Leary Carmona, executive director of the Women’s March, told the Washington Post. “We are fired up. We are ready to take action. This is a preview of what you’re going to see on November 3rd.”

Other marches are planned to kick off on the West Coast and throughout the U.S. on Saturday, including in downtown Los Angeles.