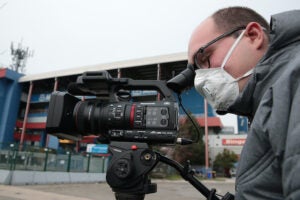 With movie theaters closed across the globe for an indefinite period of time, Warner Bros. is discussing whether to take its upcoming DC Comics tentpole “Wonder Woman 1984” directly to streaming and bypass theaters altogether, two knowledgeable individuals told TheWrap.

The discussions are still preliminary and have remained close to Warner Pictures Group Chairman Toby Emmerich and his top advisers, according to one individual with knowledge of the conversation. Even director Patty Jenkins and producer Charles Roven have not been brought into the talks.

According to the Warner insiders, the preference is still to release the movie theatrically — but executives are considering a streaming alternative, probably as a direct-to-consumer offering rather than as part of Warner’s soon-to-launch subscription service HBO Max. The concern, the insiders said, is that there is no known date for movie theaters to reopen and there may be a shortage of favorable dates once theaters do come back online for the many films that have been postponed. “Wonder Woman 1984” is still officially slated for wide release on June 4.

Roven and Jenkins would like to see the movie hit theaters in August, one insider said, but with so much uncertainty, Warner executives wonder if that is a realistic possibility amid a pandemic that has upended Hollywood and threatens to have long-term repercussions for the industry.

Still, the insider said there are not yet financial models that would allow the studio to compare the outcome of two distribution systems for a film with a budget that multiple other insiders told TheWrap is just short of $200 million. (The studio would not confirm the budget.)

Warner President of Domestic Distribution Jeff Goldstein told TheWrap that there have not been any streaming discussions. “We’re looking to release the movie theatrically, that’s our plan,” he said. An individual close to the film confirmed that Jenkins has had no discussions with the studio about a streaming option.

Roven also dismissed the idea of a streaming-only release. “It’s ludicrous if you consider how big a movie this is,” he said in an interview. “Everybody recognizes that, as interesting as streaming might be, if you want a huge, global worldwide box office, you’ve got to release it in a movie theater.”

Indeed, analysts like Lightshed’s Rich Greenfield have questioned whether video on demand could generate the the kind of revenue — and profits — that studios typically see from the theatrical release of blockbusters like a “Wonder Woman” sequel. Patty Jenkins’ 2017 original grossed $822 million based on a budget between $120 million and $150 million.

The discussion at Warner to consider streaming follows Universal’s decision last week to distribute “Trolls World Tour” directly on over-the-top platforms for a 48-hour rental fee of $19.99. That decision came amid the spread of coronavirus panic but while most U.S. theaters were still open and was initially intended as a day-and-date release timed with its opening in theaters. In the days since that decision, theater chains across the country have closed for an indefinite period because of the public health risk.

The Universal move has already raised questions about the ability of theater chains to maintain the sanctity of traditional home-release windows in the face of rising streaming powerhouses. Universal is also planning early VOD releases for three films that were in theaters when they closed, “The Hunt,” The Invisible Man” and “Emma.” A number of others have followed suit for films just in theaters, including Warner’s “Birds of Prey” and “The Way Back,” Disney’s “Onward” and Lionsgate’s “I Still Believe.” Sony’s “Bloodshot” is being made available for digital purchase earlier than expected.

Based on the success of the first film, as well as the other recent solo endeavors in the DC Universe, “Wonder Woman 1984” was expected to be a big summer blockbuster and the hope was that it would hit $1 billion in global revenue. By comparison, “Aquaman” took in $1.15 billion based on $160 million budget, and “Shazam!” earned $366 million on a $100 million budget.

But the math of a VOD-only release could be challenging. If the film skips theatrical release, Warner Bros. would have to hit tens of millions of streaming purchases to make the move financially worthwhile. A recent analysis by Greenfield showed that a billion-dollar-grossing film normally produce $375 million in profit, but traditional VOD could not generate that type of revenue or profit. According to Greenfield, replacing theatrical gross profit would require 16-21 million downloaded units sold for a $1 billion movie, assuming a charge of $30-$40 per film rental.

He noted that the most profitable PPV event in U.S. history was the Mayweather-Pacquaio fight in 2015, which grossed $400 million from 4.4 million buys, charged at $90 per buy. It’s hard to imagine moviegoers even paying $30-$40 for a new release every month, so home video wouldn’t even come close to the fight’s revenue.

“Wonder Woman” has developed into an incredibly successful franchise for Warner, and catapulted Gadot to international stardom, not to mention a symbol of feminine heroism. Set during the late height of Cold War tensions, the sequel sees Diana Prince (Gal Gadot) come into conflict with the Soviet Union and encountering a new enemy, the villain Cheetah (Kristen Wiig). The film brings back Jenkins as director and co-write along with Chris Pine as Steve Trevor. Pedro Pascal has also been cast in the film.

The individual with knowledge of the studio said that Warner had also considered sending last year’s DC Comics film “Joker” to streaming platforms rather than theaters after an initial public outcry against the violent themes of Todd Phillips film. That went on to gross $1 billion worldwide and earned Oscars for lead actor Joaquin Phoenix and Hildur Guðnadóttir’s score.

Roven said a decision about moving “Wonder Woman 1984” would wait as long as possible. “There may come a time we have to make that decision. But why not stay here as long as we can and hope for the best?” he asked. “I don’t think it would be prudent to make a move until take all factors have been taken into consideration.”