Wonder Woman is stronger than Batman and Superman combined — at the box office. 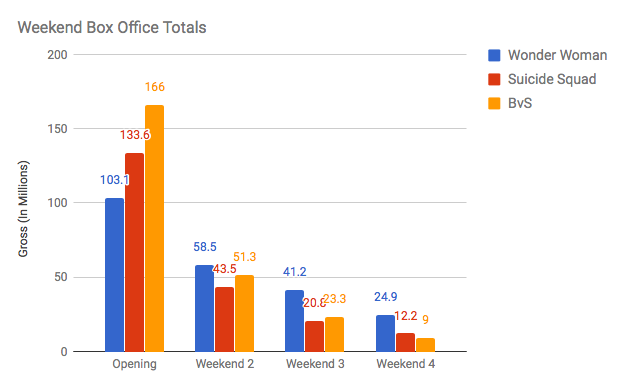 But after opening weekend, “Wonder Woman’s” box office fortunes took a far different path than those of her predecessors. “Suicide Squad” and “Batman v Superman” suffered heavy drop-offs in their weekend totals thanks to poor critical and audience word-of-mouth, with both scoring under 30 percent on Rotten Tomatoes and failing to achieve an A or A- on Rotten Tomatoes. “Wonder Woman,” on the other hand, scored a straight A on CinemaScore and has been one of the best received films of 2017 with a 93 percent RT score. 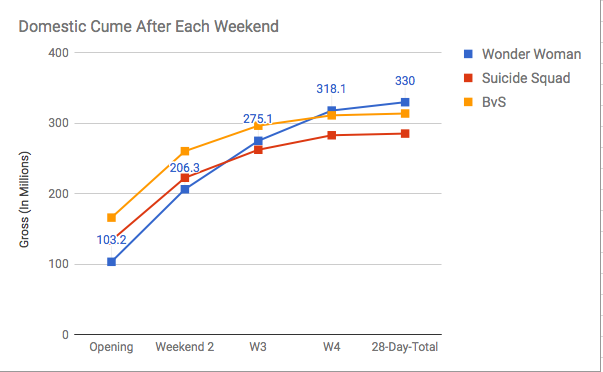 Last week, “Wonder Woman” set a new record for the highest worldwide grossing live-action film directed by a woman. Patty Jenkins’ film, which has a global total of over $660 million, passed Phyllida Lloyd’s “Mamma Mia!,” which made $609.8 million in 2008.

It remains to be seen how long Wonder Woman’s solo effort will stay on top of the DCEU box office rankings, as this November Warner Bros. will aim for bigger box office heights with “Justice League,” a title that will head into cinemas alongside films like “Thor: Ragnarok” and “Star Wars: The Last Jedi” in what will be a very crowded holiday movie season. But just as Gal Gadot’s guest cameo in “Batman v Superman” helped raise interest for her solo debut, “Wonder Woman” will certainly raise anticipation for audiences who don’t want to wait years for a sequel to see the Champion of Themiscyra on the big screen again.